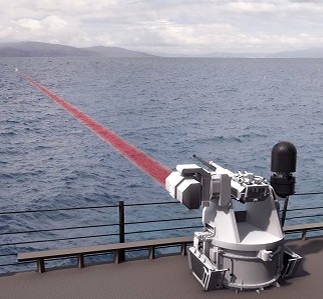 In a recent demonstration sponsored by the Commander of the U.S. Second Fleet the TLS fired against air and surface maritime targets, demonstrating a range of target effects. Additionally, swarm tests were conducted to simulate an attack by a large number of fast, maneuvering small boats, intermingled with neutral boat traffic. These tests demonstrated a consistent ability to detect, track, classify and engage threat vessels at tactically relevant ranges.

“The success of this testing exceeded all expectations and demonstrates that our Mk 38 TLS has the potential to deliver an important ship self defense capability,” said Mark Signorelli, vice president and general manager of Weapon Systems for BAE Systems. “The optics associated with control of the laser allow significantly greater capability in target identification, the ability to conduct precision tracking and engagement, and provide the option of non-lethal engagements, which are critical features to enhance ship defenses.”

The addition of the laser weapon module brings high-precision accuracy against surface and air targets such as small boats and unmanned aerial vehicles. The system also provides the ability to deliver different levels of laser energy, depending on the target and mission objectives. While the recent test at Eglin took place on land, a previous evaluation of the system at sea also proved effective, according to Spencer Ackerman of Wired Danger Room. This test was carried out on a boat at Florida’s Choctawatchee Bay, simulating engagement of multiple small pirate fast boats attacking civilian or naval vessels in swarmed.

Boeing and BAE Systems have been working together for the past two years to develop this capability. In 2010, Boeing DES conducted two experiments in the field to demonstrate the system’s ability to track surface targets and maintain a laser aimpoint with high precision.

“this system is revolutionary because it combines kinetic and directed energy weapons capability,” said Rinn. he indicated the system was designed to offer an affordable solution for the Navy, seamlessly integrated into existing shipboard command interfaces.

The Mk38 Mod2 is a derivative of the Typhoon Mk 25 Weapon System developed by Rafael. Designed for the mission of ship self-protection, the system mounts the Bushmaster M242 gun and Toplite stabilized EO target acquisition system. The system is designed for use on vessels of 50 tons or greater displacement. The system’s non-penetrating deck design allows for a variety of potential applications throughout hull and superstructure locations to optimize overall operational effectiveness.