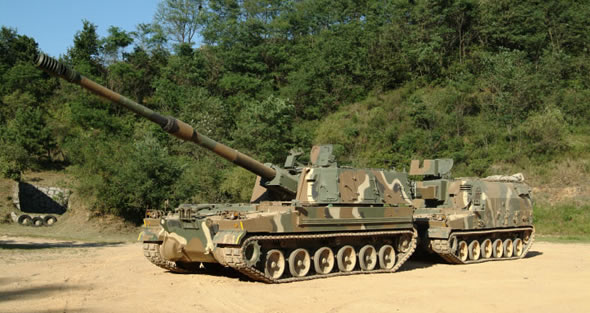 The South Korean Samsung Techwin (STW) and its Indian partner Larsen & Turbo Ltd. (L&T) announced today a teaming agreement addressing the development and production of the ‘K9 Thunder’ self-propelled artillery system (SPG) in India. According to the announcement, the K-9 is ready to enter the Indian Army’s User Evaluation trials expected to commence shortly. L&T is  displaying the Korean ‘K9 Thunder’ this week at DefExpo 2012.

Samsung Techwin is the OEM for the South Korean ‘K9 Thunder’ Self Propelled Howitzer, considered the largest, most successful 155/52 Calibre Self Propelled Artillery Systems currently in production. As part of the co-operation agreement between the two companies, STW will provide key technologies to L&T for the localization of the ‘K9 Thunder’.

During the production phase of the Indian tracked artillery program, the joint offering would have over 50% indigenous content including components like fire control system, communication system, NBC & AC, APU, life support system, etc which have already been used in India. This phase will also include significant localization of hull and turret structures and major subsystems. L&T plans to set up the integration and testing facility at its existing facility in Talegaon, near Pune.