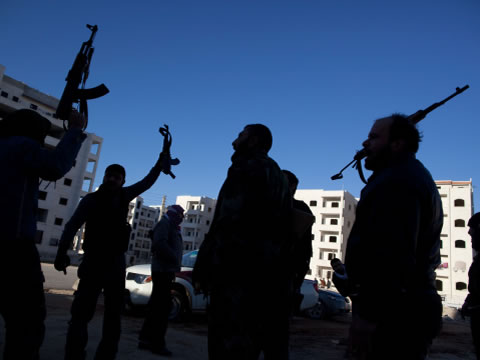 Activists and rebel soldiers based inside Syria say a small but growing number of Islamist radicals affiliated with global jihadi movements have been arriving in opposition strongholds in recent weeks and attempting to rally support among disaffected residents.

Western diplomats say they have tracked a steady trickle of jihadists flowing into Syria from Iraq, and Jordan’s government last week detained at least four alleged Jordanian militants accused of trying to sneak into Syria to join the revolutionaries.

The same thing happened in Bosnia. So-called “Afghan Arabs,” battle-hardened jihadists from all over the Arab world who previously volunteered to fight the Soviet occupation of Afghanistan, ran off to Bosnia to fight a jihad against Serbs when no one else would step up to help out the Bosnians. They made virtually no impact on the course of the war, but some of them stuck around after the fighting was finished and are still causing trouble even today.

Some from the same crowd wanted to help out in Kosovo, too, but the Kosovars told them to get lost. They had help from the US and NATO and neither needed nor wanted help from radical Islamists.

Bonsia and Kosovo are on the periphery of the Muslim world, but Syria is right in the heart of it. The longer the civil war there drags on, the more actual terrorists (as opposed to the make-believe terrorists Bashar al-Assad has been fighting so far) we should expect on the scene, especially if no one else will step up and help the Free Syrian Army in a serious way.

MICHAEL J. TOTTEN is a contributing editor for World Affairs who has reported from the Middle East, the Balkans, and the former Soviet Union. He is the author of The Road to Fatima Gate, which won the Washington Institute Silver Book Prize in 2011, In the Wake of the Surge, and the forthcoming Where The West Ends. His work has also appeared in the New York Times, Wall Street Journal, New Republic, City Journal, Reason, and numerous other publications. He lives in Oregon and is a former resident of Beirut. Contact him at [email protected]