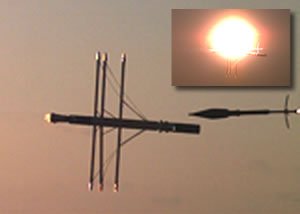 RAFAEL has demonstrated key elements for an active defense system for helicopters, designed to protect from unguided weapons such as Rocket Propelled Grenades (RPG). These threats that are typically fired from very short range, proved lethal against helicopters in recent conflicts, particularly in Iraq, Afghanistan and Somalia. In a recent terror attack on the Southern border near Eilat, terrorists fired RPGs against Israeli attack helicopters, but luckily did not hit them.

Shoulder-Launched, Man Portable guided Missiles (MANPADS) are considered the common threat to helicopters and aircraft they are typically engaged by countermeasures (also known as ‘soft kill’ defenses). Such countermeasures include flares, infrared jammers and electronic countermeasures, aiming to distract, confuse or incapacitate the ‘soft elements’ of the threat, like the guidance systems of incoming missiles missiles, or their command links. In contrast, the RPG does not have a ‘soft side’, it is unguided, fired at a straight line from very short range, and when the warhead is activated, on impact with the target or other objects, its relatively large warhead causes an explosion that would destroy a soft target like a helicopter.

Widely used with insurgents and terrorist groups worldwide, RPGs and MANPADS  are posing a significant threat to helicopters, particularly in the take-off, landing and low hovering phase, as they make a large, slow and vulnerable target. MANPADS such as the Stinger, SA-7, 14, 18 and latest generation SA-24 are widely available, putting at risk aircraft and helicopters at low and medium altitudes. A number of new countermeasures are designed to address the advanced MANPADS threats, including new laser-based directional infrared countermeasures (DIRCM) and multi-spectral flares, but the RPG threat has sofar remained unchallenged.

RAFAEL’s new ‘Hard Kill’ technology marked an important milestone in September 2011, demonstrating the kill of an incoming RPG at a safe distance from the protected platform. The new system dubbed ‘Fliker’ is developed by the company’s MANOR Technologies Division with support by the Israeli MOD Defense Research & Development Directorate (DRDD).

Fliker is designed as an add-on defensive layer, augmenting existing warning systems and countermeasures used on combat helicopters. As such, it will be activated after all other measures have failed to defeat the threat, meaning the time remaining for engagement and the distance to the target are shortest. To minimize response time Manor designers developed a new launcher for this application, combining pyrotechnic charges and high speed electrical motors to achieve very high traverse rate, while aiming at the target with high accuracy to achive effective kill without initiating the RPG’s explosive charge. (the same counter-RPG concept is used in hard kill systems on tanks).

Specialized in the development of warheads, MANOR defined a unique kill mechanism for the Fliker, taking the impact point as far as possible from the protected platform and reducing collateral damage effect to minimize the risk of debris hitting the helicopter. The warhead is activated by an advanced optical proximity sensor also developed by RAFAEL. Fliker is designed as an add-on kit augmenting existing self protection systems operating on helicopters. The kit will include the specialized turret, interceptors and software enhancements to the self protection system, that will identify a threat ‘not responding’ to soft kill countermeasures, thus activating Fliker for the hard-kill.