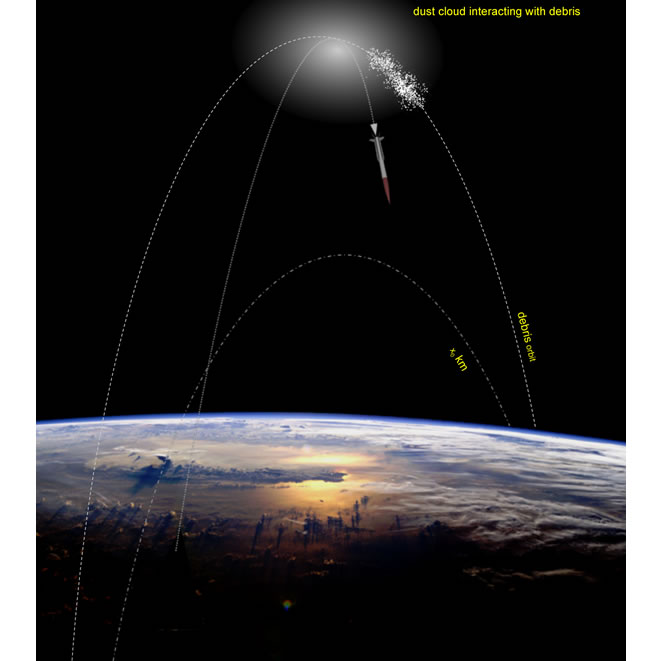 Millions of small debris orbiting earth at Low Earth Orbit (LEO – at altitudes of 2,000 kilometers and below) are posing serious risk to manned and unmanned spacecraft. Scientists at the U.S. Naval Research Laboratory (NRL) are evaluating the feasibility of dispersing tons of dust to ‘sweep’ these objects from their LEO orbit, slowing and lowering them into the upper atmosphere, where they will decay the heat generated from drag induced by the upper earth atmosphere.

The National Aeronautical and Space Administration (NASA) Orbital Debris Program Office estimates there are more than 21,000 orbital debris objects larger than 10 centimeters (roughly 4 inches) in diameter in LEO, and approximately 500,000 object particles between 1 and 10 centimeters, with the number of debris particles smaller than 1 centimeter in excess of 100 million. Traveling at speeds in excess of 8 kilometers per second, or greater than 17,000 miles per hour, even miniature debris would wreak havoc on invaluable space assets like the International Space Station (ISS), Hubble Space Telescope and numerous weather satellites, damaging solar arrays, instrument panels and solar shields.

In 2011, the National Research Council (NRC) conducted an exhaustive study to assess NASA’s meteoroid and orbital debris program. The report concludes that LEO orbital debris is at the ‘tipping point’ – the threshold for collisional cascade, or Kessler effect, in which the number of objects in LEO is dense enough that collision between objects, could cause a cascade. This exponentially increases the likelihood of further collisions and makes it increasingly risky to maintain space assets without clearing the debris population.

“Hundreds of near-misses occur each year between orbital debris and operational satellites,” says Gurudas Ganguli, head, NRL Space Analysis and Application Section at the Plasma Physics Division. “Dust, similar to that which naturally fills the near-Earth environment, can be deployed artificially in a narrow altitude band to enhance drag on debris and force re-entry.”

About 100 tons of cosmic dust is introduced daily in the Earth’s environment naturally in the form of micrometeorites. In addition to this natural source, human space activity also introduces large quantities of dust in space regularly. However, this dust is distributed over a very large volume, making it too widely dispersed to affect orbital debris.

As Ganguli explains it, the essential idea is that dust, if artificially deployed on orbit in opposite direction to the debris trajectory, can induce an enhanced drag on the debris. The novelty is that by choosing the dust characteristics, for instance, mass density, size, etc., it is possible to synchronize the rate of dust and debris descent. This offers the possibility to clear a very large volume of small debris by deploying a modest amount of dust, 20 to 40 tons, in a narrow layer and “sweeping” of the debris volume by the dust layer.

“It is well known that the natural drag due to neutral atmosphere decays satellite orbits,” adds Ganguli. “We use the natural atmospheric drag to decay the deployed dust orbits and simultaneously use the dust to induce enhanced drag on the orbital debris. Like the natural dust, most of the deployed dust as well as the small orbital debris will incinerate while reentering the Earth’s dense atmosphere. So the environmental effect of releasing the dust is expected to be benign.”

Research indicates that the dust based ADR system can be a cost effective means to clear deadly untrackable small orbital debris with manageable risks to existing space assets and can be developed with off-the-shelf type technologies in the near term. This same concept can be utilized for removing larger debris with a suborbital dust deployment. Preliminary analysis suggests tungsten be a prime candidate for the dust because of its high density, relative abundance, availability in powder form and modest cost, all contributing factors to the efficiency and economy of the system. (Source: NRL)