Pentagon Press Secretary George Little announced on 11 July that the North Carolina incident would not change the scheduled deployment of the Ospreys to MCAS Futenma. Secretary Little told reporters that the landing was only a “precautionary step during a routine training flight.” Mr. Little also told reporters that the cause of the landing was being investigated and that the United States would continue to “work closely with our Japanese allies to provide information on the MV-22,” an aircraft he further described as having “a very strong safety record overall.”

This incident, while relatively minor, has reignited Japanese fears that the Osprey is too dangerous for operations in the heavily-populated communities that surround American military facilities in Japan. While making every effort to sooth Japanese fears of the Osprey, the Pentagon proceeded with deployment of the Marine MV-22B squadron. Twenty-four aircraft were loaded aboard a transport in San Diego earlier this month and are presently enroute to MCAS Iwakuni in Yamaguchi Prefecture, the Marine Corps’ largest air facility in mainland Japan. The aircraft will be assembled and undergo testing in Iwakuni prior to delivery to MCAS Futenma in Okinawa.

As part of an agreement with Japanese officials, the Ospreys will remain grounded at Iwakuni until the Pentagon completes accident investigations involving two previous Osprey crashes. A Marine MV-22B crashed in Morocco in April of this year resulting in the deaths of two Marines. A second crash in Florida, this one involving an Air Force CV-22, occurred in June causing injuries to all the aircraft’s crewmembers.
The Osprey grounding is limited to Japanese territory only; the aircraft has remained in active flight operations in all other worldwide locations without restriction.
News of the emergency landing in North Carolina prompted Okinawa Governor Hirokazu Nakaima to request an audience with Japanese Defense Minister Satoshi Morimoto to discuss the MV-22 issue once again. Governor Nakaima was accompanied to Tokyo on 12 July by a select delegation of city officials including the mayors of Ginowan and Nago, the two Okinawan cities most affected by deployment of the Ospreys. All of these Okinawa representatives have been tenacious in their vocal and official opposition to the Osprey deployment.

The Marine Corps has been replacing its fleet of well-worn CH-46 Sea Knight helicopters one operational squadron at a time since 2007 with a scheduled completion date of 2019. The MV-22B is the aircraft of choice as a replacement and is the only aircraft the Marine Corps has available to replace the CH-46E helicopters. This simple fact is not likely to change regardless of Japanese opposition. The CH-46E Sea Knights have, for the most part, outlived their operational usefulness and must be replaced.

How safe the MV-22B Osprey is in an operational role is a matter of opinion and sometimes passionate disagreement. The United States claims the aircraft is one of the safest aircraft in the current inventory. Japanese officials representing Okinawa dispute this claim to the point of threatening to close all American bases on the island of Okinawa if the Osprey is delivered to Marine Corps Air Station (MCAS) Futenma. MCAS Futenma is the home base for most of the Marine Corps’ helicopters and transport aircraft stationed in Japan.

One might consider a statistical analysis to be the answer to this safety question, but such an analysis alone may not please all parties and would be difficult to validate to everyone’s complete satisfaction.
When comparing the safety record of the MV-22B to that of the CH-46E Sea Knights it will replace, the first question to be answered is what statistics are the most appropriate to be used in a safety comparison? The CH-46 Sea Knights have a long and storied history of exceptional service in peacetime and combat conditions, flying in almost every environment imaginable. The MV-22B, in contrast, hasn’t been in operation that long and has been subjected to intense media scrutiny since its inception, a spotlight of public interest the CH-46 never had to contend with.

A Marine Corps environmental impact report, released by the Japanese government on 14 June, gave the MV-22B a slight statistical safety edge over the CH-46. This report became public one day before the Air Force CV-22 crash in Florida. The April crash of an MV-22B in Morocco was not included in the impact report as the Marine Corps review was completed before the date of that crash. Of course, the big question is, how are recent accidents evaluated and what weight do they carry in the overall safety analysis?

Should we include Morocco incident in the Marine report, the MV-22B would appear statistically less safe than the CH-46. The pertinent data related to this accident was published in a Marine Corps addendum to the initial report delivered to the Japanese government following a preliminary investigation into the crash. This addendum would seem to confirm that the CH-46 is the safer aircraft.
Marine Corps officials claim the numbers don’t tell the whole story and insist the Osprey is a safe aircraft.

Aircraft safety reviews are based on the number of Class A mishaps an aircraft experiences over a period of 100,000 flight hours. A mishap is rated a Class A incident if the aircraft or government property sustains damage requiring repairs valued at $2 million or more or if the incident results in the death or permanent disability of a servicemember.

Marine Corps spokesman Captain Richard Ulsh said that the Osprey is a safe aircraft with five years of combat missions to its credit and the Morocco crash creates an unfavorable safety image of the Osprey that is neither earned nor justified. Captain Ulsh extolled the Osprey’s performance during five years of continuous combat operations in Iraq and Afghanistan. He said, that during this period of combat “the MV-22 has only had two Class A mishaps; the most recent one in Morocco in April of this year.” He went on to say that this record of survivability in a hostile combat environment is a solid testament to the aircraft’s performance and operational safety.

The Sea Knight airframe, with necessary upgrades over time, has been in continuous operation since 1964. The US Navy retired the aircraft in 2004 replacing it with the MH-60S Knighthawk while the Marine Corps kept the airframe in operation awaiting operational deployment of the Osprey.

Captain Ulsh pointed out that the CH-46 fleet has recorded more than 450,000 flight hours in the past ten years alone while the Osprey has accumulated only 115,000 hours since it became operational in 2007. One or two Class A mishaps would have little impact on the overall safety record of the CH-46 Sea Knight while one or two such incidents would have an adverse impact of inflated significance on the MV-22’s safety record.
Captain Ulsh emphasized that the CH-46E Sea Knights are old, worn-out, and must be replaced. Ulsh indicated that one way or the other; the Japanese people would have to live with the Osprey because the Marine Corps has no alternative available. He also pointed out that the aircraft’s range, versatility, and load capacity would allow US forces in Japan to make more operational flights over mainland Japan in support of training missions and humanitarian activities.

The residents of Okinawa, routinely incited to protest the American presence on their island by various political groups and spurred to action by memories of a 2004 CH-46 crash, have adopted a stance of firm opposition to the stationing of the MV-22B squadron on the island. In 2004, a Marine Sea Knight from MCAS Futenma crashed and burned on the campus of a nearby university causing some damage to university property, but resulting in no civilian injuries and only minor injuries to the crew. The burned-out walls of the campus building damaged in the accident remain standing in the university’s courtyard as a reminder of the crash.

The 2004 crash was eventually determined to have resulted from poor maintenance. Since the time of that incident, protestors have regularly gathered to call for the closing of the Futenma facility. Although the MV-22B still faces considerable opposition in Okinawa and in Iwakuni, the aircraft will arrive at MCAS Iwakuni late this month. What protests materialize following their arrival in Iwakuni, and later in Okinawa, remain to be seen. It is reasonable to believe that the protests will not end anytime in the near future and should a single mishap occur once the Osprey becomes operational, one should expect even greater and more heated protests. 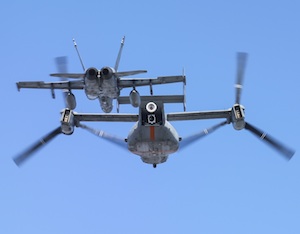