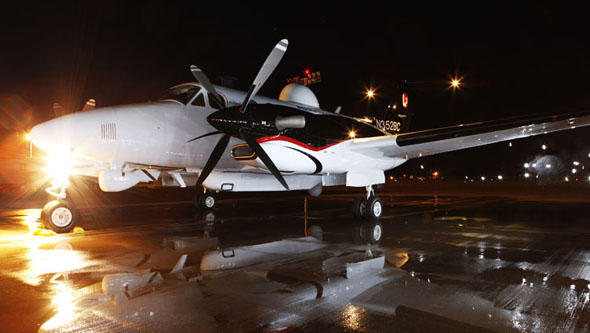 Saudi Arabia has requested to buy eight Hawker Beechcraft King Air 350ER special mission aircraft, packed with airborne Intelligence, Surveillance, and Reconnaissance (ISR). The cost of the procurement package is estimated at about quarter billion US$, including four 350ER aircraft, with associated ISR systems and communications plus options for four additional planes with the same package. In recent years the Royal Saudi Air Force has been operating two Boeing RE-3 Sigint aircraft (broadly equivalent to the RC-135 Rivet Joint). According to the US Defense Security Cooperation Agency (DSCA) that announced the Saudi request last week, The Saudis have already used the RE-3 aircraft in this role, but this fleet is currently undergoing depot maintenance and will not be available until after 2015. In this interim phase, the King Air 350ER-ISR aircraft will carry out part of the the missions performed by the RE-3.

The payload installed on these twin-prop planes will be different from the SIGINt-dedicated ER-3. Its sensor package will comprise a multi-sensor Electro-Optical payload, Synthetic Aperture Radar (SAR) and a modern Signals Intelligence (SIGINT) System. This system will be compatible with and will continue to supplement the capabilities of the RSAF RE-3 aircraft. For self protection from surface-to-air threats the aircraft will be equipped with the AN/AAR-60 Infrared Missile Warning and AN/ALE-47 Countermeasures System. Typically these systems are coupled with chaff-flare dispensing systems. In addition to the high-rate data-link, the aircraft will also be equipped with AN/ARC-210 VHF/UHF/Satellite Communication Transceiver Radios with Have Quick II and encryption and AN/APX-114/119 Identification Friend or Foe Transponder.

If Riyadh decides to proceed with the program L-3 Communications is likely to be the prime contractor, the group’s Mission Integration Division in Greenville, Texas, which also lead the modification of 37 ‘Project liberty’ MA-12W aircraft for the US Air Force. L3-COM will also be responsible for the mission systems integration, C4I Integration, aircraft modifications, as well as ongoing support.Other contractors include the platform manufacturer Hawker Beechcraft in Wichita, Kansas. Other subcontractors include Raytheon, Rockwell Collins, Harris, ATK, BAE Systems and VIASAT. L3-COM has also teamed with a number of international system providers to offer a similar configuration of the 350ER known as Spydr, complying with International Traffic in Arms Regulations (ITAR) regulation which could limit the export of the version and sensors used by the US military. nevertheless, Riyadh, a close ally of Washington, is expected to receive a configuration similar to the one used by the US, just as their ER-3 resembled the highly classified USAF Rivet Joint, sofar exported only to the UK and Saudi Arabia.