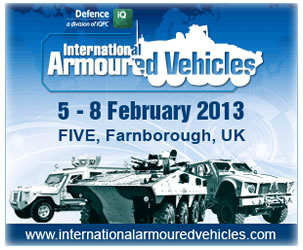 International Armoured Vehicles, the largest show dedicated solely to the armoured vehicles community, is launching a live dynamic vehicle experience at the Long Valley Test Track during the 2013 event, which will take place at the FIVE in Farnborough, UK February 5-8, 2013. The Long Valley Test Track, located in Aldershot, features different terrains and obstacles, such as an ‘alpine track’, sand traps and water obstacles, providing for an enhanced live experience.  Open for test track exhibitors and their military guests, the dynamic vehicle experience is designed for vehicle manufacturers to showcase their products to their clients in an “immersion” setting, with each track running a duration of anywhere from 15-30 minutes at a time.

With this new installation, the 2013 International Armoured Vehicles show marks a clear evolution in Defence IQ’s flagship armoured vehicle event.  The event is traditionally comprised of a large scale conference of 600+ attendees, combined with a focussed exhibition hall, which annually welcomes 2,100+ visitors from 47 countries.

Quoted in February 2012 in his previous role, Lieutenant General Christopher Michael Deverell, Director Land Materiel, DE&S UK MoD commented, “There are lots of conferences around, but there’s not another one on this sort of scale that is specifically focussed on armoured vehicles, so it fills a very useful niche.”

Running for its 12th time in 2013, International Armoured Vehicles once again offers a high-level and technical programme during the conference, with topics focussing on Survivability, Innovative Armour, Simulation, Maintenance and Industry Requirements.  The popular introduction of last year’s G6 Industry Panel sees its return for 2013, with new panellists such as General Dynamics, Iveco, Lockheed Martin, Nexter, Renault and Textron, as well as the addition of the International Industry Leaders Panel (IILP).  Much like the G6 Panel, the IILP will feature leaders in the international space, discussing up-and-coming markets of interest to the land defence industry, such as Turkey, Brazil, Russia and the Middle East.

The 2013 show also introduces the Industry Focus Day, which is designed to provide a platform for technical experts from Tier 1 companies to present their current projects, challenges and future capability requirements to members of the military and Tier 2 and 3 groups.

Joining them are over 50 senior government officials and international flag officers from 24 countries, including:

The Exhibition spans the whole of the FIVE venue, and is set to feature 100 exhibitors from around the world, the International Armoured Vehicles Awards, as well as the Innovation Stage.  Featuring direct updates from upcoming vehicle programme requirements from major OEMs, to the SMEs providing the newest and most innovative solutions for today’s capability challenges, the 2013 Innovation Stage provides attendees insight into the future of the armoured vehicles market.  Last year’s Innovation Stage offered exhibition guests insight from guest speakers of leading industry such as General Dynamics, Kaller, Thales and Tawazun.  The official programme for the Innovation Stage is scheduled for release in early November 2013.

Full details on the dynamic vehicle experience at the Long Valley Test Track, conference and exhibition are available on the event website, www.internationalarmouredvehicles.com.

Professionals involved in armoured vehicles are encouraged to register for a free exhibition pass to the 2013 Exhibition (does not include the conference), or to join Defence IQ’s extensive social media community on www.defenceiq.com, LinkedIn group (Armoured Vehicles Networking Group), Twitter (http://twitter.com/IAVehicles) and Facebook.

Interested parties can contact [email protected] for conference pricing options.  The event runs from 5-8 February 2013 (Exhibition open from 6-7 February 2013) and is open to defence-related professionals.

Defence IQ is delighted to invite Defence Update members to attend the main conference at a special discount rate of saving 20% off the standard conference price. Email [email protected] or call +44 (0)20 7368 9300 with code IAVs2013_DU for more information.