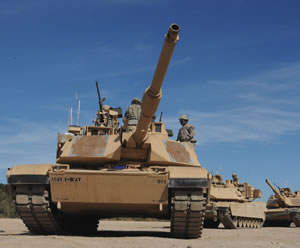 In September 2012 GDLS was awarded a contract worth $395 million to support the first phase of Engineering Change Proposals (ECP) for the M-1A2 SEPv2 Abrams tank upgrade, the initial phase includes research, development and testing. The value for the first year is around $80 million. “Right now the electrical power is in short supply on the tank.” Said Lt. Col. William Brennan, product manager for the Abrams tank, “The centerpiece of the ECP 1 upgrade will be to restore lost power margin through the integration of a larger generator, improved slip ring, battery management system and a new power generation and distribution system,” he explained.

The work includes miniaturization of electronics, through line replaceable module (LRM)- based electronics architecture and increasing electrical generation capacity, distribution and management. Low-rate initial production (LRIP) of ECP1 upgrades-equipped Abrams tanks is expected to start in 2017 and complete by 2020. Communications and networking upgrades considered under the M-1A2 ECP also include the replacement of SINCGARS type radios with the new JTRS HMS types, better serving high capacity data communications. To distribute this data through the platform, the tank will be equipped with Gigabit-Ethernet databus and new, high capacity slipring connecting the turret to this high-speed network. At the AUSA 2012 exhibition General Dynamics also displayed a new diesel engine proposed for the Abrams tank that would increase its combat range by nearly 50 percent from 205 miles to about 300miles.

The MTU 833 engine and new Allison transmission could reduce the Abrams’ cost per mile by 14% compared with its current turbine-powered engine. “Through the development of an Abrams diesel engine that is significantly more efficient than a turbine, we can reduce the cost per mile, increase the tactical range, lower maintenance costs and reduce the number of fuel and cargo trucks needed,” said Mike Cannon, General Dynamics Land Systems’ senior vice president, Ground Combat Systems.

Eying to sustain the strength of its remaining heavy force, the Army is embarking on upgrading programs to regain the performance levels these combat vehicles were originally designed for. After years of continuous patchworks, applying new armor and electronic equipment to better protect against new threats, most of these platforms have already exceeded their design specs. For example, applique armor and SLAT cages have exceeded the physical envelopes and load margins of vehicles, limiting mobility. Lack of engine power and overloaded electrical supplies are further reducing their performance. In addition to the ECP for the M-1 SEP-2 the Army has also embarked on ECP upgrades for the Bradley and M-109 are addressing those Space, Weight and Power-Cooling (SWaP-C) gaps.

ECPs to be implemented with each of the remaining platforms are expected to ‘buy back SWaP’, by redesigning and modernizing certain elements of the vehicles. Unlike past upgrades, ECP modifications would not result in capability enhancements beyond the level originally planned for each vehicle.

Practicing strategic and tactical mobility is part of the readiness maintenance and qualification of armored formations. One such exercise was conducted in October 2012 last month To practice operations with landing crafts, the Army