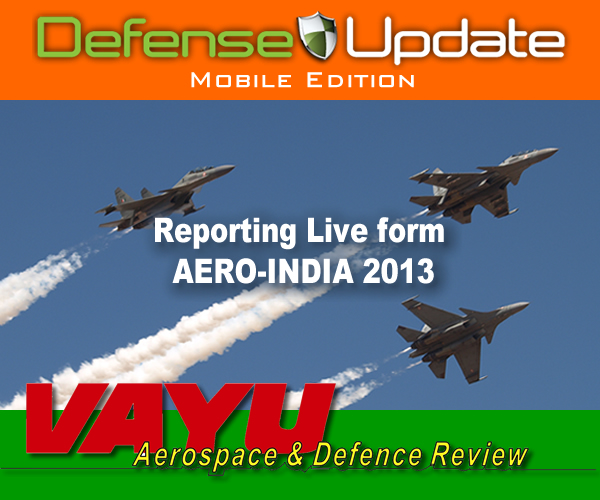 Download our apps to receive on-site news, reports and photos!

Reflecting the rapid growth of India’s civil aviation, defense and aerospace market, Aero-India 2013 taking place at the Indian Air Force Station Yelahanka, near Banguluru (Bangalore) in Southern India from 6th to 10th February 2013 is the largest-ever air show in the country. The biennial event is organized by the Ministry of Defense, and managed by the confederation of Indian Industry (CII). 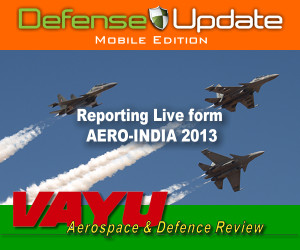 As always, our reporting will provide an objective, first hand impressions of the show, outlining the main topics, news and reviewing new products, companies, and other highlights related to India’s aerospace market and the main aerospace programs unfolding in India today.

Please refer to our live report or specific posts available at our top news page. You may also subscribe to get the news via email, through our free subscription form.

While we focus on the Indian market, our aim is to balance our reporting with input from different sources, following the local Indian market, and closely watching the growing interest by French manufacturers, companies from Russia and Israel, which provide the largest defense exporters here; Germany and the U.S. are also growing powers that we plan to cover. We encourage companies to email us with relevant news to [email protected], or suggest coverage via the comment section attached to each post.

The first Aero India event was launched in 1996, and has been covered by Defense-Update since 2005. While focusing on the Indian market, Aero India has become one of the most important aerospace and defense fairs in Asia. The show will provide an important platform for government organizations, public sector enterprises (PSU) and private sector companies from India to interface directly with hundreds of leading aerospace and defense companies from around the globe, seeking to develop their business in the Indian subcontinent.

Aero India is a showcase of the latest equipment developed in India – from the major platforms developed indigenously at the country’s research and development centers, through enterprises focused on local production, maintenance and support, manufacturing of aero-structures, avionics, electronics, electro-mechanics, electro-optical systems, as well as information systems for the fast growing aerospace market.

Over 50% of the 592 exhibitors participating at Aero India 2009 were foreign companies, representing 25 countries. In 2011 the participation is expected to increase, although no official numbers were published yet. Foreign and local exhibitors will be grouped in national and industry pavilions.

Defense Update will continue to update this preview of Aero-India 2013, highlighting the main themes, participating aircraft, review of national pavilions and presenting selected exhibitors. Our report will continue on-site through the week of the show, provided as part of Defense-Update news blog. If you are using a mobile phone, you may also check http://m.defense-update.com for an ultra-fast, mobile-phone optimized experience.

Defense-Update Airshow Live! introduces: India’s Aerospace Companies – In addition to the known names of India’s major aerospace manufacturers, are numerous privarte sector companies, which are setting the stage for the rapid growth of the Indian Aerospace market. At Aero India 2013 you will be able to get to know some of the names we are introducing to you here. Aircraft and aerostructures builders, subsystems and parts manufacturers, designers, OEMs, Electronic Systems developers and manufacturers, service providers and more.

The following list was published for Aero-India 2011 and will remain online through December 2012. To secure your placement for the next two years, including Aero-India 2013, Act Now! Take advantage while the Early Bird rate is still available.