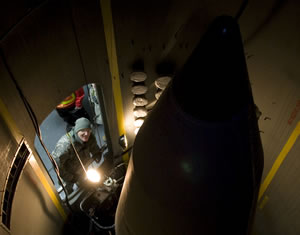 The US is scaling down the European Missile Defense program, by limiting the system’s interceptors against intercontinental ballistic missiles. Secretary of Defense Chuck Hagel announced yesterday the increase in the number of Ground Based Interceptors to be positioned in Alaska, and the planned deployment of a second TPY-2 radar to Japan, two immediate steps to better protect the United States of America from potential missile attacks from North Korea and Iran. The cost of these measures, estimated at one billion US$ is expected to come from delaying or cancelling future enhancements of the SM-3 Block II/B, a step which would undoubtedly relieve the tension between Moscow and Washington over the European missile defense issue.

What alreted the US were two new developments in North Korea – the recent nuclear test, which may have tested a miniaturized device that could be fitted into a missile warhead, and the continued development of the North Korean KN-08 missile, sofar attributed as an ’Intermediate Range Ballistic Missile’ (IRBM). “We believe the KN-08 probably does have the range to reach the United States” Admiral James Winnefeld, Vice Chairman, Joint Chiefs Of Staff said, admitting the Korean threat has evolved faster than expected. “we’re not reacting to those timelines” “We have continually built this hedge — a set of tools from which we can select, if the threat either goes faster or slower than we thought.” Adm. Winnefeld emphasized, rebuffing claims that past reductions in the missile defense program were done prematurely. “We are ahead of any timelines of any potential threat” Secretary Hagel stressed.

“We believe the KN-08 probably does have the range to reach the United States” Admiral James Winnefeld, Vice Chairman, Joint Chiefs Of Staff said, admitting the Korean threat has evolved faster than expected.

The new measures include the increase the number of combat-ready interceptors stationed in silos at Fort Greely, Alaska. The second measure will place a second AN/TPY-2 missile-defense forward-based radar in Japan. Hagel added the administration continues to move forward with an environmental study for a 3rd United States missile defense site, on the East Coast.According to the new plan announced Defense Secretary Hagel yesterday, the US is moving to maintain at least 44 Ground Based Interceptors (GBI) at Fort Greely in Alaska, up from 30 in the current inventory, and move forward to deploy GBI assets in two additional bases in the US, but will no longer seek to equip its future forward deployed AEGIS Ashore missile units with advanced SM-3 Block II/B interceptors. Fort Greely currently has 30 interceptors in 34 silos – the number is expected to grow to 40 in full occupancy, with the planned activation of Missile Field 1 that was mothballed since 2011. At the time, Pentagon officials told Congress that to be viable, the six silos on site must be hardened. Reactivating the six silos in Missile Field 1 would take two years and cost approximately $200 million.

The Pentagon expects all interceptors to be positioned at Fort Greely Alaska by 2017, up from 26 currently maintained there. The future of this enhanced capability is hinged on the intercept test planned toward the end of this year. The enhanced kill vehicle known as CE-2 is already in production, and the interceptor is expected to be ready for testing toward the end of the year, preceded by a test of the current interceptor (CE-1) earlier in the summer. Provided that testing and verification of the enhanced kill-vehicle are successful, all 44 interceptors will gradually receive the new warhead, James Miller, Undersecretary for Policy, Department Of Defense said. The first interceptors to be upgraded into CE-2 will be spares and those intended for testing, to be followed by the production of additional 14 missiles providing adequate spares and continue support for the program.

“By shifting resources from this lagging program to fund the additional GBIs as well as advance-kill vehicle technology that will improve the performance of the GBI and other versions of the SM-3 interceptor we will be able to add protection against missiles from Iran sooner, while also providing additional protection against the North Korean threat.”

Originally, the Pentagon expected the European missile defense system will be able to provide an early intercept of threats directed at the US by 2020, thus enhancing the defenses provided by the GBI. “The timeline for deploying this program had been delayed to at least 2022 due to cuts in congressional funding. Meanwhile, the threat matures.” Hagel said “By shifting resources from this lagging program to fund the additional GBIs as well as advance-kill vehicle technology that will improve the performance of the GBI and other versions of the SM-3 interceptor we will be able to add protection against missiles from Iran sooner, while also providing additional protection against the North Korean threat.” Hagel explained.
The SM-3 Block IIB has been a controversial program, fuelling much of the Russian opposition to the establishment of US lead European Missile Defense plan. Moscow suspected the advanced SM-3 Block II missiles that were intended to replace all existing SM-3s beginning 2020 will diminish its own deterrence, turned against Russian intermediate and intercontinental ballistic missiles early in their flight, thus destabilizing the balance of forces between the two superpowers.

In fact, the Russian claim was not too far from the truth. ‘With this weapon MDA planned to deploy higher velocity land-based interceptor equipped with advanced discrimination technologies and backed by enhanced command and control, designed to intercept large raids of Medium Range Ballistic Missiles (MRBMs), Intermediate Range Ballistic Missiles (IRBM) and ‘non-advanced Intercontinental Ballistic Missiles (ICBMs) early in flight. What ‘non advanced’ meant in MDA terminology is probably ‘non Russian’, but Moscow wasn’t ready to buy that.

Following the US announcement, the Russians were not thrilled. “That is not a concession to Russia, nor do we regard it as such,” Russian Deputy Foreign Minister Sergei Ryabkov said. “All aspects of strategic uncertainty related to the creation of a U.S. and NATO missile defense system remain. Therefore, our objections also remain.”

Dempsey, chairman of the Joint Chiefs of Staff will travel to Moscow soon to hold discussions with his Russian counterpart on the missile defense and further nuclear reductions. Detailed discussions between Washington and Moscow are already ongoing in recent weeks. Dempsey had said in the past the US will find common ground with Russia on the European Phased Adaptive Approach because it is not threatening strategic nuclear deterrence.

Funding these decisions Missile Defense Agency is restructuring the Phased Adaptive Approach missile defense for Europe into three rather than four phases, essentially dropping the development and deployment of ‘next generation AEGIS interceptor’ (also known as SM-3 IIB). The main drive behind this phase was to extend the capabilities of the European missile defense system beyond Europe, with interceptors capable of defeating intercontinental ballistic missile (ICBM) targeting the U.S. Forward of the future SM-3 Block IIB missile program. Three industry teams have been involved in the concept definition and risk reduction phase, with request for proposal (RFP) and source selection of developing teams was planned for 2014.

“The Europeans will see no difference in their ballistic missile defense… Phase-Adaptive Approach will involve deploying about 24 SM3 IIA interceptors – same timeline, same footprint of U.S. forces to support that.”

The fate of the ‘Next Generation AEGIS Interceptor’ is unclear, Secretary of Defense Hagel was less deterministic in addressing the future of the program, saying “the restructuring of the SM-3 Block IIB program will result in greater support for a new and enhanced kill vehicle for the modernization of missile defense interceptors. “

“We no longer intend to add them [SM-3 Block IIB] to the mix, but we’ll continue to have the same number of deployed interceptors in Poland that will provide coverage for all of NATO in Europe” Undersecretary Miller said. “The Europeans will see no difference in their ballistic missile defense. The phase four for the SM3-IIB was about continuing defense of Europe, but also being able to extend that defense to part of the United States. As for the deployment in Poland, “Phase-Adaptive Approach will involve deploying about 24 SM3 IIA interceptors – same timeline, same footprint of U.S. forces to support that. “Miller added.

Whether or not it was intended to, the decision to cancel plans for the long-range interceptors will help the president’s arms control goals. Missile defense has been a contentious issue since President George W. Bush sought to base long-range interceptors in central Europe to stop Iranian missiles from reaching the U.S. Russia believed the program was aimed at countering its own missiles and undermining its nuclear deterrent. Soon after taking office in 2009 President Obama announced a revised plan, canceling the planned GBI interceptor bases in Poland and a radar in the Czech Republic, opting for AEGIS SM-3 based interceptors considered more suitable for intermediate range missile intercepts. Under that plan interceptors were to be upgraded gradually over four phases, culminating early next decade with those intended to protect both Europe and the United States.