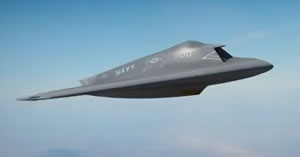 Lockheed Martin unveiled today the concept design of the company’s Unmanned Carrier Launched Airborne Surveillance and Strike (UCLASS) air vehicle, that integrates technologies from F-35C, RQ-170 and other systems to provide persistent ISR and light strike capabilities. The company said its UCLASS design will balance endurance, early operational capability, and inherent growth that will enable operations in any environment or threat scenario. The US Navy foresee the UCLASS type drones assume operational roles in full-spectrum operations – supporting operations from asymmetric warfare and counter terrorism to carrier-based ISR and strike missions.

Among the stealth elements visible in these concept drawings are the engine exhaust tailpipe, recessed and blended into the trailing edge to improve thermal emission and radar reflection – a design already used to a limited extent in the RQ-170. A serrated panel seen on both sides of the fuselage could be an auxiliary air intake, augmenting power for carrier catapult launch and full-power landing approach. The main payload bay combines a low-profile installation similar to that of the F-35, employing an EO/IR and Infra-Red Search and Track (IRST) sensors positioned behind specially coated aperture that masks the payloads to eliminate radar reflections. Additional space for more payloads and weapons could be located at the wing roots, but no indication is provided by the video or photos. Radar and electronic sensors are likely located along the leading edge, similar to the F-22, F-35 or B-2, but there are no indications for such.  A bulge above the air intake seems to be a radome covering the satellite communications terminal, providing low-probability of intercept connectivity. High level of autonomy designed into the vehicle possibly means the SATCOM link can be shut down completely, to reduce signature emission in critical mission phases.

The company said its proposed approach supports the Navy’s efforts to develop an operational UCLASS capability within the current schedule and budget.