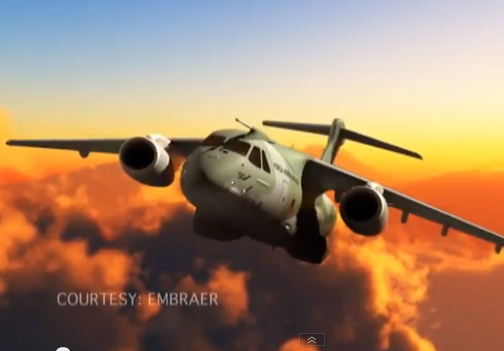 The growing cooperation between Boeing and Embraer on the Brazilian KC-390 programme. According to this agreement Boeing will lead sales, marketing, training and sustainment of the KC-390 in selected markets. I-HLS reports.

Boeing and the Brazilian company Embraer have expanded the technical agreement signed in the spring of 2012. The two companies have agreed to expand their cooperation, with Boeing becoming responsible of sales efforts in the U.S. and the U.K. and some Middle East countries, Luiz Carlos Aguiar, head of Embraer’s defense business, said today at the Paris Air Show. The jet will vie for a market of more than 700 planes, he said.

The two companies intend to offer the KC-130 as a cheaper replacement to the Lockheed MARTIN C-130J. Critical design review for the airlifter is set for next month. The first order is expected to be announced in the first quarter of next year. Two KC-390 prototypes are set to roll out later this year.

Embraer has awarded AEL Sistemas S.A. (“AEL”), the Brazilian subsidiary of Elbit Systems  development contracts to provide three additional systems, valued at $25 million for the new KC-390 military transport and refuel jet: Self-Protection Suite (SPS); Directional Infrared Countermeasures (DIRCM); and pilot orientation Head-Up Display (HUD). This selection is in addition to the earlier selection of AEL as the provider of the mission computer for the new jet.