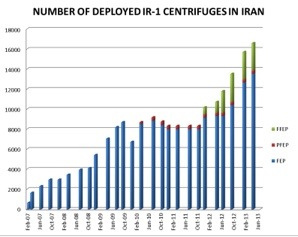 Iran is expected to achieve a critical capability in mid-2014, which is defined as the technical capability to produce sufficient weapon-grade uranium from its safeguarded stocks of low enriched uranium for a nuclear explosive, without being detected. The Institute for Science and International Security (ISIS) reported in its recent analysis last week.

David Albright and Christina Walrond explain in their report that Iran would achieve this capability principally by implementing its existing, firm plans to install thousands more IR-1 centrifuges, and perhaps a few thousand IR-2m centrifuges, at its declared Natanz and Fordow centrifuge sites. Iran’s criticality date could be achieved a few months earlier, if Iran successfully deploys and operates several thousand advanced centrifuges and continues installing thousands of IR-1 centrifuges. “Preventing Iran from achieving a critical capability through sanctions, increased frequency of international inspections, and negotiations is a priority”. The report understated.

Iran’s nuclear weapons capabilities continue to grow. However, by charting Iran’s possible future paths to obtaining a nuclear weapon, the United States and its allies can identify opportunities to slow this growth. One critical factor affecting Iran’s potential timeline to the bomb is the speed at which its declared centrifuge capacity could reach a level where it could use its existing, safeguarded stockpile of low enriched uranium to “dash,” without timely warning for the international community, to the production of sufficient weapon-grade uranium for a nuclear explosive device. Adequate warning would allow enough time for a response to this action. During the final presidential debate of the 2012 campaign, President Barack Obama characterized such a time as when “we would not be able to intervene in time to stop [Iran’s] nuclear program.” When Iran reaches the technical capability to produce sufficient weapon-grade uranium for a nuclear explosive without being detected, it can be understood to have achieved what is defined here as a “critical capability.”

ISIS has assessed that in a breakout or dash to nuclear weapons Iran could produce a significant quantity (25 kilograms of uranium enriched to above 90 percent U-235) at its declared centrifuge enrichment plants in as little as a few months. During the next several months of 2013, this minimum timeline could decrease to about one month, depending on the growth of Iran’s stock of near 20 percent low enriched uranium and the number of centrifuges it deploys to enrich uranium.

The International Atomic Energy Agency (IAEA), which regularly inspects Iran’s declared centrifuge plants and the low enriched uranium these sites have produced, would be able to detect breakout within these time periods.

As Iran continues to expand the numbers of its deployed centrifuges at its declared Natanz and Fordow gas centrifuge sites, its breakout times are expected to further decrease. The number of centrifuges it can build and install in cascades depends, among other factors, on its ability to smuggle key goods in violation of other countries’ national trade control laws and United Nations Security Council sanctions. But current efforts to stop Iranian smuggling are not sufficient. Iran has installed new centrifuges at a very fast rate over the past year, implying that it is still obtaining key supplies from abroad for its IR-1 centrifuges. Nonetheless, the available information is insufficient to conclude Iran has all it needs in hand to deploy thousands more IR-1 centrifuges or predict with certainty how many additional IR-1 centrifuges Iran will deploy in the next year.

Another factor that will likely decrease breakout times is Iran’s deployment of the advanced centrifuge, the IR-2m, at the Natanz Fuel Enrichment Plant. Predicting the effect of this deployment remains difficult because Iran has not begun enriching in these centrifuges as of mid-June 2013 and little hard data are available about their performance.

Given uncertainty over the success of efforts to stop Iranian smuggling efforts to outfit its centrifuge program and its continued deployment of centrifuges, an assessment of future enrichment capabilities and reduced breakout timelines is warranted. This report evaluates Iran’s ability to increase its number of deployed centrifuges beyond current levels and when Iran could produce sufficient weapon-grade uranium without the IAEA being able to provide timely and reliable warning of that breakout, or when Iran is first estimated to reach what is defined here as a critical capability. The report assesses this date by projecting the number of IR-1 and IR-2m centrifuges Iran could deploy in the next year and by estimating the resulting impact on breakout times.

A central conclusion is that Iran is expected to achieve a critical capability in mid-2014. To delay that date, this report recommends measures to head off significant increases in deployed centrifuges and improve chances of timely detection of a breakout.