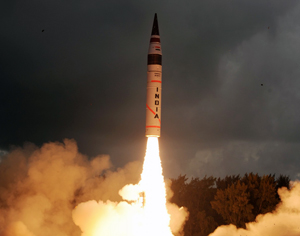 India performed today the second test flight of its largest ballistic missile – ‘Agni V’. This intermediate range ballistic missile (IRBM) has a strike range of more than 5,000 km. The three stage, solid propellant missile was test-fired on 08:50 AM from a mobile launcher from the launch complex-4 of the Integrated Test Range (ITR) at Wheeler Island off Odisha coast. The surface-to-surface missile can carry a nuclear warhead of more than one tonne.

Today’s launch was the second developmental trial of the long range missile while the first successful test was conducted on 19 April, 2012. The DRDO is expected to conduct at least three more tests before declaring the ballistic missile operational and ready for induction into the military. According to Indian sources, Initial Operational Capability (IOC) is expected in 2-3 years.

The missile measures about 17 meter (56 foot) long and 2 metres (6.5 foot) in diameter. Its launch weight is around 50 tonnes. Once Agni-V is fielded, India will possess a strike capability reaching from Europe to China. The Indian Agni series includes a number of nuclear capable missiles such as Agni-1 with 700 km range, Agni-2 with 2,000 km range, Agni-3 and Agni-4 with 2,500 km to more than 3,500 range.