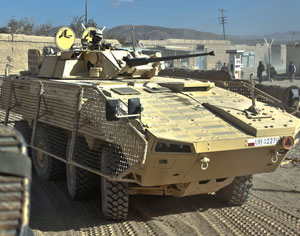 The Polish armored vehicle manufacturer WZM will resume production of Rosomak armored vehicles next year and continue production at least through 2019, assembling 307 vehicles. The new order will increase the number of Rosomak (Wolverine) combat vehicles in Polish Army inventory to 877, providing a major element in the Polish 2022 defense modernization plan. Under the zł1.65 billion (US$544 million) contract that spans over five years, WZM is likely to produce about 60 vehicles next year, primarily recce and fire support vehicles. Under a separate contract the company will also deliver 122 refurbished Rosomak vehicles fitted with remotely operated turrets integrated with Spike LR missile systems. A prototype of this vehicle is expected to be ready for testing by 2015.

Poland first signed a contract with Patria in April 2003, for the local production of 690 AMVs, but the number was eventually dropped to 570 vehicles. 313 of these were the Rosomak Infantry Fighting Vehicle (IFV) configuration, mounting the Oto Melara Hitfist-30P turret armed with 30 mm ATK Mk44 Bushmaster II automatic gun. Under the licensing and production agreements, some 90% of Rosomak components are manufactured by Polish companies. Polish officials claim the new agreement recently concluded with Finland is more favorable for the Polish side, as it grants Poland export rights for its Rosomak variants. In recent years the Polish vehicle was displayed in a number of international exhibitions in India, France and Bulgaria. Poland The agreement with Patria extends local production rights for the AMV in Poland by ten years to to 2023 and grants repair licensing through 2052.

Few weeks earlier, Prime Minister Donald Tusk announced plans to consolidate the Polish defense sector. Under his plan, the country’s major armament and military equipment manufacturers will be consolidated into a single entity called PGZ (Polska Grupa Zbrojeniowa – for the ‘Polish Armaments Group’). Under the plan, the new Group will be comprised of the 11 subsidiaries of the Huta Stalowa Wola S.A. group (Overhaul and Manufacturing), OBR Marine Science Center and Companies from the Polish Defense Holding (formerly the BUMAR group). All will be merged into one business entity that is likely to be traded on the Warsaw Stock Exchange. 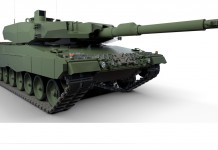