According to Indian media sources New Delhi has terminated a helicopter purchase from the Italian-british company AgustaWestland, following allegations that the company or its middlemen bribed Indian officials and politicians to secure the win.

Finmeccanica, AgustaWestland’s parent company said it received the MOD notification concerning the appointment of an arbitrator, and confirmed it also received the termination notice. The company said it will soon name a third arbitrator representing the company in the arbitration process. The company said it will continue supporting the three helicopters already delivered to and currently operated by the Indian Air Force. “It is the Ministry of Defence’s admitted position (PIB release of MoD statement February 14, 2013) that the tender process has been duly followed” the company communique noted, “Accordingly, the termination notice received yesterday will have to be discussed within the framework of a fair arbitration process.”

The Indian Air Force contracted AgustaWestland to buy 12 AW101 executive helicopters in a deal valued over US$770 million. In 2010 the deal was signed but stopped following of accusations the foreign contractor exercised ‘pre contract integrity’. The company has already delivered three of the 12 helicopters, and received third of the payment.

AgustaWestland is a subsidiary of a subsidiary of the Italian headquartered international corporation Finmeccanica. Senior officials of Finmeccanica including chief executive Giuseppe Orsi are facing trial in Italy for alleged corruption. Orsi, chief of AgustaWestland at the time, is accused of having allegedly paid bribes to secure the deal. A preliminary report filed by Italian prosecutors said about $68 million were paid in kickbacks to middlemen, Italian politicians and Indian officials. Italian investigators also named former Indian air force chief SP Tyagi in a preliminary inquiry submitted to an Italian court. Orsi and Tyagi have denied any wrongdoing.

In its comment Finmeccanica noted it has already introduced stringent ethical procedures common to all Group companies that have harmonized their systems of rules based on the standards set by the parent company. These processes are reviewed regularly and have been further strengthened in correspondence with the most stringent international ethical standards. Also AgustaWestland applies the same strict procedures to prevent corruption in accordance with the updated Finmeccanica policies.

More on the subject at Reuters. 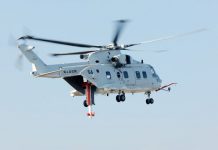