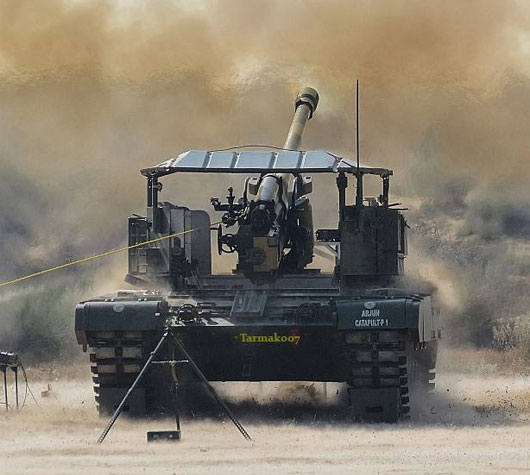 Among the new artillery pieces on show at Defexpo 2014 is a new Arjun Mk1 chassis matched with a Russian built M-46 130mm self propelled gun (SGP) system based. Known as ‘Arjun catapult’, the vehicle was developed by the Indian Combat Vehicle Research & Development establishment (CVRDE), a division of the Defense Research and Development Organization (DRDO). It will replace a similar system based on obsolete Vijayanta chassis, currently operating with two artillery regiments of the Indian Army.

The Arjun based SPG began field-testing in 2012. In March-April this year the Indian Army plans to carry out a major test involving both Army and contractor personnel. Based on the conclusion of these trials the Army plans to order 40 such guns to equip the two artillery regiments. “The catapult would fulfill the interim and immediate requirements of artillery, there by extending the life of 130 mm guns” CVRDE Director Dr P Sivakumar said; the project has been progressing rapidly, addressing urgent Army requirements, “first field development trials in November 2012, four moths after receiving the Army requirement.” Sivakumar added.

Side and front armored walls protect the gun compartment, providing the crew with armor protection of STANAG level II.