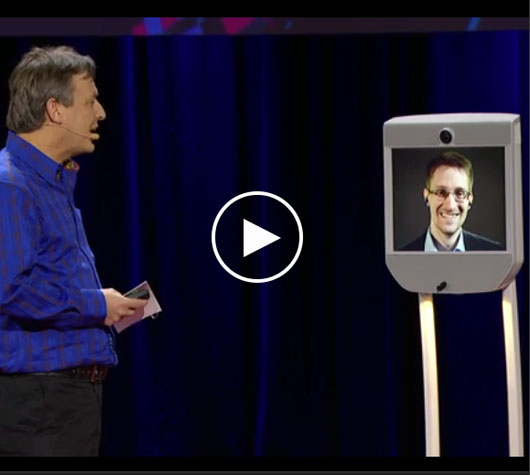 Appearing by telepresence robot, Edward Snowden speaks at TED2014 about surveillance and Internet freedom. The right to data privacy, he suggests, is not a partisan issue, but requires a fundamental rethink of the role of the internet in our lives — and the laws that protect it. “Your rights matter,” he says, “because you never know when you’re going to need them.” A system administrator at the US National Security Agency (NSA) until 2013, Snowden leaked thousands of classified NSA documents, sparking a global conversation about citizens’ rights to privacy on the Internet. He spoke with Chris Anderson on a recent TED interview.

Ledgett claims that Snowden has placed national security assets and human lives at risk, by disclosing capabilities to adversaries of the USA. The need for surveillance is ubiquitous and protected by law, Ledgett said, “we are on the same network” Ledgett said, “I am using the same email network that is the No 1 email service of choice for terrorists”. He justified the large scale surveillance operations the NSA is conducting, including the ‘Bullrun’ saying – “everyone does it” about surveillance by metadata, he said” metadata is the information that lets you find connections that others are trying to hide”. he added that the alternative to that will be gigantic content collection that will be more invasive to privacy. “If you are not connected to those valid intelligence targets you are of no interest for us”.