The Boeing company [NYSE: BA] unveiled today the new jet trainer aircraft it has developed with Saab AB [Stockholm: SAABB]. The companies plan to offer the plane for the U.S. Air Forces’ future trainer aircraft; the tender will open this year, and the T-X contractor downselect phase is scheduled for 2017. Boeing T-X is an all-new advanced pilot training system designed specifically for the U.S. Air Force training mission.

The aircraft developed by Boeing and Saab uses a single General Electric GE404 engine, twin tails, stadium seating and an advanced cockpit with embedded training. It is designed to look, feel and perform like fighter aircraft. The twin-tail design offers improved stability and is visually similar to current and future fighters, to enhance training.

According to Boeing, the twin tails provide improved control and inherent speed break functionality, furthermore, it is and safer during air refueling.’Stadium seating’ allows for ideal instructor positioning and visibility for flight instruction, from teaching basic traffic pattern operations to advanced visual air combat training. The seating arrangement is compliant with JPATS 1-7 to accommodate a wider range of individuals to train and instruct. Reconfigurable large area displays are used in the cockpit allow students and instructors a maximum range of training options.

The companies built two production-level trainers that will be used for flight testing and to demonstrate the new aircraft’s performance, as well as the affordability, and maintainability advantages of their approach.

The new platform represents an all-new aircraft designed specifically for the U.S. Air Force training mission. It takes advantage of the latest manufacturing technologies, tools, and techniques. According to Boeing statement, it is an advanced aircraft designed to evolve as technologies, missions and training need change. The design is claimed to be more affordable and flexible than older, existing aircraft. The companies employed much of the experienced learned through recent fighter programs such as Gripen and Super Hornet. Another aspect reducing life cycle cost is improved maintenance. The Boeing T-X design focuses on accessibility, with fewer and more common fasteners, and readiness of critical items like engine and seats. It is also designed around common U.S. Air Force ground equipment and uses established suppliers to reduce supply chain complexity.

“Our T-X is real, ready and the right choice for training pilots for generations to come,” said Boeing Defense, Space & Security President, and CEO Leanne Caret.

The US Air Forces’ T-X program includes new trainer aircraft, ground-based training, and support – designed together from the ground up. The U.S. Air Force Advanced Pilot Training System competition, commonly known as T-X, is designed to replace the T-38 trainer in use today. It will help train fighter and bomber pilots for generations to come. 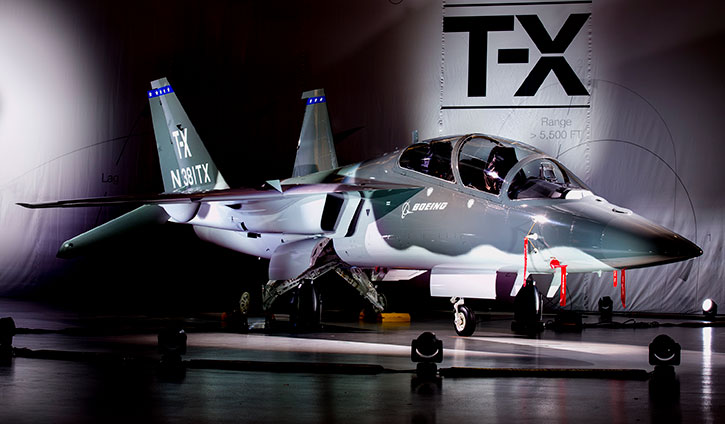