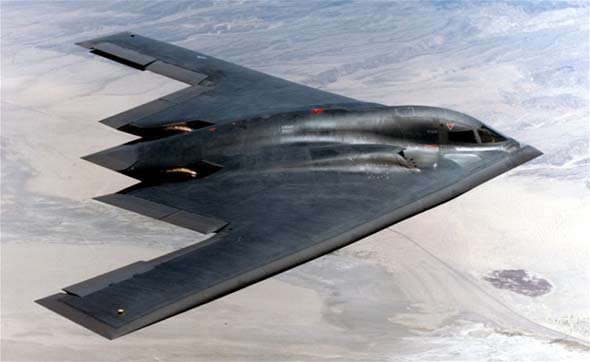 The B-2 Spirit stealth bomber offers similar capabilities, with the addition of stealth – enabling it to penetrate heavily defended airspace, especially at night. The B-2 also carries an impressive weapon’s load – it was recently re-equipped with a modified weapons rack that simultaneously dropped 80 JDAM GPS-guided weapons from a single B-2. The B-2 flew 43 combat missions in Operation Iraqi Freedom, employing more than 400 precision weapons throughout in the air campaign. Since then, the aircraft has been used to test new munitions to further enhancing its conventional attack capability, including JASSM stealth cruise missiles, which allows the aircraft to strike targets from a greater distance; The EGBU-28, which combines both global positioning system and laser guidance for increased operational flexibility (all weather) and adaptation of the 500 pound (227 kg) JDAM. The B-2 previously used this system only to guide 2,000-pound (909 kg) bombs. The smaller warhead enables the B-2 to increase the potential number of JDAMs carried per flight from 16 to as many as 80.

The B-2 can also carry eight of the massive 5,000-pound (2.27 ton kg) GBU-37 bunker-buster bombs, and may eventually carry a pair of the 30,000-pound (13.6 ton) (Massive Ordnance Penetrators. Eventually, the could carry 216 or even as many as 324 of the new, guided Small Diameter Bombs (SDB). These bombs are carried on the BRU-61/A smart pneumatic carriage, each holding four SDB weapons. In addition, improvements have been made to the Spirit’s coating, which has reduced maintenance actions from days to minutes.

Next on the upgrade plan is the introduction of Link-16 communications will further improve the bomber’s integration to support tactical operations. These datalinks will feed targeting information including image and video directly to individual bombs. Other future upgrades will include radar updates, which will enable the B-2’s weaponry to reach targets further underground. 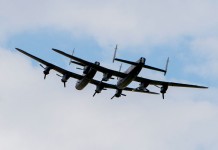 Two Lancaster Bombers fly together for first time in 50 years