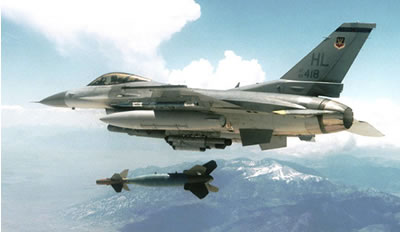 Since their inception in 1968, the Laser Guided Bombs (LGB) have revolutionized tactical air-to-ground warfare. Current production versions are based on 3rd generation weapons, offering semi-active laser guidance combined with GPS targeting, a system first utilized during OIF. The semi-active laser guided munitions drastically reduce the numbers of weapons and sorties required to destroy a target, but also feature accuracy, reliability, and cost-effectiveness previously unattainable with conventional weapons. Due to their high precision, LGB kits are usually attached to structure penetration bombs, such as the BLU-109B capable of penetrating up to 2.4 meters of reinforced concrete. Such a weapon uses 240 kg of high explosives, encased in hardened steel shell weighing 874kg. Much larger penetrating weapons were developed by the USAF for destruction of underground shelters. One such weapon is the Massive Ordnance Air Blast (MOAB) weapon, carried by C-130, B-1, B-2 and B-52 bombers. The weapon is loaded with 8,170 kg warhead and has a CEP of four meters. During Operation Iraqi Freedom (OIF), Paveway LGBs made up nearly half of all air-to-ground Precision Guided Munitions (PGMs) used by coalition forces. In 1991 Operation Desert Storm, the vast majority of weapons were unguided, however, in OIF, the ratio of guided- to unguided munitions reversed. 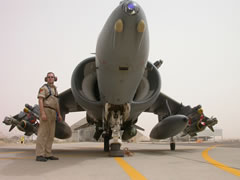 Enhanced Laser Guided Bombs (ELGB) are enhanced with additional GPS guidance capability, to enable improved operational flexibility and employment under adverse weather conditions such as heavy clouds coverage, minimizing laser use (stealth) or presence of countermeasures. With the addition of GPS capability, the LGB can “memorize” the laser spot location, and continue to navigate to this spot for up to 10 seconds after the laser designation goes off for any reason. The weapon can also be employed in GPS only mode, attacking targets whose coordinates are known. The Enhanced Paveway interfaces with the aircraft avionics over the Mil-Std 1760 armament bus, and can be programmed to memorize up to eight target locations, to enable rapid retargeting during flight. When 1760 is not available (older aircraft), the weapon can be programmed with one target prior to takeoff, and engage targets designated by coded laser, when such signals are detected.

During OIF Enhanced Paveway II and III bombs demonstrated the advantages of such combined seekers operating in all-weather conditions with minimized collateral damage. They also offered the flexibility to re-program new target positions whilst airborne, especially where time sensitive targeting became increasingly important. Their dual-mode guidance system meant that they could be delivered laser guidance if accurate target co-ordinates were not available.

The Paveway IV is the latest generation member of the Paveway family of precision guided munitions built by Raytheon. The weapon has evolved from Enhanced Paveway, which the RAF has already employed. For the PGB program, Paveway IV guidance kits will be fitted to 500-lb warheads. It will enter service with the RAF in 2006.

The BLU-118B thermobaric warhead can also be equipped with laser guidance kit. Despite the large area they affect, thermobaric charges must be placed in fixed position to create the optimal overpressure and heat effect within the target enclosures. The BLU-118B is designed to fit the Mk-84 size weapon size and GBU-24 guidance kit. Following laser designation, these weapons can be aimed directly at cave entrances or penetrate rooftops, to explode inside the underground cavities. When compared to standard BLU-109 penetration warhead explosive, BLU-118B shows significant increase in overpressure and pressure-impulse inside a tunnel complex. The weapon was first deployed in combat On March 2002 against a cave complex in the Gardez region of Afghanistan.