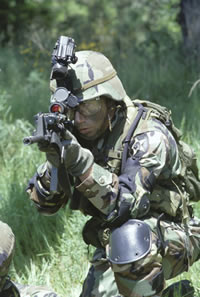 Battery power, rather than fire power, is rapidly becoming a major factor in military planning, as the electronics that power modern and future systems are becoming more sophisticated, complex and reliant on portable battery power. As the need for electrical power is growing, so does the total weight of power sources – a growing component of the soldier’s load is the primary and backup power sources for individual systems – communications, navigation, imaging, computation, sensors, etc. The logistics burden of supplying power to the battlefield is also growing and becoming more complex, due to lack of battery standardization and unification. For example, as operation Iraqi Freedom opened, batteries were in very short supply, as troops in the south of Iraq used half of the projected total war requirements in only a few days.

Supplies to combatants in the North of Iraq were unavailable. Forward stocks of batteries drained during the first days of the hostilities and the entire supply of the US Army was to be used up in two months, if not replenished under an emergency program. Batteries had to be airlifted from US depots to Iraq and round the clock production of new inventories had to be initiated with six manufacturers worldwide.

Today’s need for electrical power on the battlefield is high and continues to grow. Unless sources of power evolve with the systems that use them, they will create a logistics and tactical burden for the soldier. Because new power-consuming systems quickly are becoming an integral part of the way the Army plans to fight, better ways must be found to support power requirements. Initiatives have been started to save money on batteries in the long term and to enable combat and materiel developers to reduce expenses early in a product’s life cycle. Power sources must be an important consideration in all future materiel and combat developments. As soldiers expect more out of the equipment they use, they must expect more from their power sources.