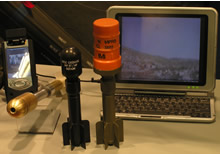 Among the infantry systems on show at LIC 2004 were many improvements to existing weapon, and new systems under development in response to GCS requirements. One such system is the Refaim, under advanced development at IMI. The system was originally developed for the IMI Tavor assault rifle but was also modified to become modular and fit on other weapons, such as the Colt M-4.

The system utilizes International Technologies Lasers (ITL) MPRS infantry fire control system which can fire three different submunitions – an airburst grenade, a CS grenade and an observation grenade. Elbit has demonstrated a sophisticated Sniper Control System, developed by Eyerec, to facilitate the integration and control of accurate sniper fire in the conduct of MOUT operations.

Utilizing the same components, Eyerec offers simple but effective capability to enable both guns and handguns to be used to fire “around the corner”, while the shooter maintains a safe position behind the obstacle. different system relying on dedicated weapon system is proposed by CornerShot. The system uses a wearable computer for display, or utilizes ITL’s new Situational Orientation System (SOS) commander’s integrated display binoculars for orientation.

RAFAEL displayed several types of weapon systems designed specifically for MOUT. Two breaching devices, including the Simon door breaching system and Shoulder Launched Wall Breaching Stand-off Munitions, which can be deployed from a tripod or shoulder fired. The system can breach a man size hall in a triple brick wall, from a distance of 20 meters.

The Personnel Network Radio PNR-500 from Tadiran Communications is designed to provide communications between infantry team members, over a very short range (up-to 800 meters). When such devices are distributed to all the troops of an infantry squad, these sets enable the squad leader to control his teams more effectively and quietly, while facilitating external communications to the company and other external networks.