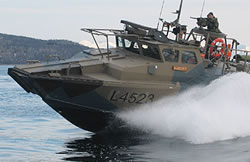 Since coastal security units have to secure the entire coastlines, an important parameter is the cost and size of the fleet. Long meandering shorelines and islands often offer many hideouts for infiltrators and mask them from radar detection. Effective security of such coastal lines and waterways require constant surveillance, by airborne, coastal radars and electro-optical means, and frequent patrols that can re-visit every area frequently, and at the same time, respond to any alert raised by the surveillance elements, under all visibility and sea conditions. On such missions, patrol boats are required to maintain their positions for over 24 hours, depending on the number of boats and the number of sectors under protection. The boats should be designed with minimal draft, to allow operating at the shallow coastal water, and be less confined by reefs.

To facilitate endurance, range and sea-keeping capabilities, medium sized boats (+20m) are frequently used while smaller boats are also utilized for shorter missions. Most patrol boats use conventional aluminum hulls, which ensure long service life, simple and maintenance and repair. Several ship constructors are already offering FPBs made of composite materials. Composites are offering attractive weight and construction saving, which directly contribute to lower cost and higher speed but these materials can also be affected form extended exposure to extreme environmental and physical conditions. Some structures, especially those made of glass fibers also absorb water and become heavier over time. Composites promise a great future for faster and lighter patrol boats, but at present, the limited life-cycle experience with composites hulls have so-far limited the acceptance of such boats to few innovators.

Patrol boats are armed with machine guns, are effective at very short ranges, due to the instability of the platform. Stabilized weapon stations for heavier armament (20-35mm guns) include electro-optical weapons director, they are remotely operated from a dedicated console, which enable the accurate engagement of targets at much longer range, therefore making the weapon effective both for deterrence and engagement of targets. Remote controlled weapons stations such as the Mini Typhoon developed by RAFAEL are now offered for 0.5″and 7.62mm machine guns and grenade launchers, and enable accurate engagement of targets from the protected bridge.

Equipped with advanced optical and thermal surveillance systems, patrol boats can detect targets at extended range, especially at night. While the target can be faster than the PB, the patrol boat don’t have to outpace its target, but track the target and coordinate the engagement or intercept from a distance, without engaging in a fast chase. They can plan such engagement with interception profile that will enable them to close in faster, and be at the most advantageous position to hit the target, while being protected from incoming fire, if forceful action must be taken. The important factor in such chase is the persistence – the ability of the patrol boat to cruise at maximum speed, and outlast the opponent on long and fast cruises at high sea.

Since missions are long, it is important that the crew will be able to operate fresh and ready during the entire mission, even at high sea condition, while the opponents, sailing on smaller boats, will suffer much more. The boats also have to be large enough to accommodate, detain and interrogate the crew and passengers of the intercepted target. It should also be capable of towing at least small boats.