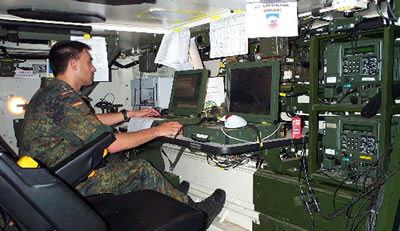 After parallel development of two Army C2 systems designated GeFuSys and FuWES-Kern H, the two programs were integrated into the C2 system currently known as “Faust” (Fahrungsausstattung Taktische). Faust was further designed to be integrated into the division level and army-wide FuInfosys H C4I system. the tactical C2 system, was deployed in 2003 with a battalion-size Battle Group West, part the allied forces in Afghanistan (ISAF). Since June 2004, Faust was introduced for operational evaluation the German elements in the peacekeeping forces in KFOR, SFOR and has been cleared for operational use in February 2005.

Faust is designed with modular elements, which can implement new modules, regular upgrades and local adaptations to the basic system. Each Faust unit is linked to a vehicle and transmits its own GPS position to the network. The basic service provided by the system are the geographic information display (GIS) map display and “Blue Force Tracking”, monitoring all friendly elements in the area over a digital map, and providing commanders with common and updated operational picture. Other services include secure messaging, communications management and control and general office automation functions. Monitoring all activities and resources over a digital map dramatically improves the utilization of assets, reduces voice communications and generally improves command and control. This function also supports an “emergency call” which transmits the vehicle’s position and emergency alert which flashes on the recipients’ map. Faust was developed by EADS Deutchland GmbH.

The GIS and mapping functions support different scales of maps, as well as on-screen position, range and area measurements, path finding, perspective views etc. The system provides automated task organization. Tasks can be displayed in a “tree” form, enabling “drag and drop” of elements between various units for. Every change is reflected in the relevant unit’s organization, and “to do” list.