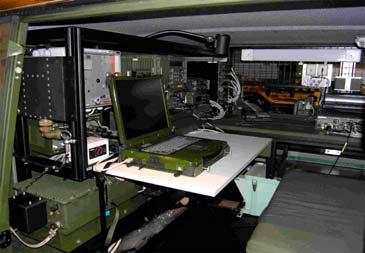 The principal c4 system for the German Army is FüInfosys Heer, a comprehensive collection of C2 applications, communications and computing services linking all combat, combat support and service support elements of the land forces from division HQ down to the squad commander. FüInfosys H utilizes the system resources already proven by Faust C2 system at battalion and brigade level. These include monitoring and distribution of common operational picture, automated and secure messaging, management of personnel and material and office automation functions.

The system is designed to support a wider, more diversified communication network and is designed with common modules which are utilized in branch specific applications including HERGIS army Aviation C2, DIFA armored cavalry C2 network, and SAFES medical services support network, all planned to be integrated with the FüInfosys Heer array. Other system integrated with FüInfosys Heer include the IFIS C2 system currently used by armor and armored infantry elements and the German Army infantry modernization program IdZ. The system is scheduled for initial deployment with the German Army by late 2006 – early 2007.

FüInfoSys Heer is installed in truck mounted shelters, deployed with command-post and combat-support as well as combat vehicles, and linked up via tactical communications systems.

FüInfoSys H is furthermore already conceptually integrated into FüInfoSys SK, which embraces all branches of the armed forces, and in the medium-term will migrate to FüInfoSys SK as an application specific to the terrestrial armed forces.

December 21, 2006: The German Army signed the initial orders for a planned procurement of FüInfosys H to equip 1,500 vehicles. Delivery of the first batch is expected to complete by 2012, under the current € 380 Million contract. Deliveries will begin starting 2007 to German Army units as well as the joint German-French Brigade. The system will be produced by the FüInfoSys Heer joint-venture established between, Krauss-Maffei Wegmann and Rheinmetall Landsysteme.