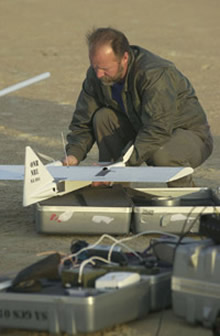 Currently available MAV are larger than DARPA’s target platforms, but are already backpackable and operated by a single soldier or a team of two. It is designed to be fully autonomous – and require no special expertise or support at the operational level, at the platoon or battalion. The small drones are built to survive harsh conditions, operate in difficult weather conditions and communicate with their ground systems without the use of sophisticated directional links. The small dimensions dictate the use of lightweight sensors and payloads, based on miniature day or night cameras as well as uncooled infrared systems. Datalinks are maintained as simple systems, as the requirement is for short range operation (10km) directly over the combat area, where enemy electronic countermeasures are not expected.

As the design goal of current MAVs is aimed at 10kg weight, the most critical aspect of the aerial vehicle is weight. Therefore, lightweight materials are used extensively to form large assemblies that are easily interconnected to form the aerial vehicle. Future materials in development today will integrate power sources into the structural assemblies, providing “multifunction structures”. In order to reduce weight, various approaches are used, from prefabricated shell, made of durable lightweight composites, to a podded payload, carried by a hollow tube connected, to film laminated wings and tail, as demonstrated by the Skylark miniature UAV designed for Elbit Systems by AD&D. Other approaches are based on inflatable aero dynamic structures, which enable deployment of miniature UAVs from artillery projectiles and rockets. Vertical takeoff and landing systems are also proposed for MAV, utilizing miniature helicopters as well as various ducted fan tail sitters, as demonstrated by Singapore Technologies Engineering (ST Aero) Fantail. Other systems utilize effective aerodynamics to perform a “one way” glide mission, as they are deployed from UAVs, aircraft or guns, over the target. Such expendable MAVs can also be used for attack missions.

Most miniature UAVs are powered by electrical motors, which limit their endurance to 1 – 2 hours, enabled by the power density provided by the batteries carried on board. Although internal combustion (piston) engines could provide a good alternative, their noise signature, weight and reliability are not suitable for MAV applications. Current MAVs are using specially designed lithium primary batteries, while new high density zinc-air cells have also been introduced, to offer up to 33% higher density power compared to lithium batteries. Zinc-Air batteries are designed specifically for mini-UAV applications. Developmental items have already been tested with NASA on a micro-UAV, flying a 58 minute mission. Other designs are underway for micro UAVs such as IAI Mosquito, as part of an Israel’s MOD R&D program. Future applications of DARPA’s “palm power” power cells could also be applied to MAVs, offering extended range and endurance.

Advanced MAV payload weigh from just less than 1 kg to few tens of grams, yet include two or four axis stabilization, and high performance television camera, infrared sensors, mostly those operating in the 3-5 micron range, for day/night surveillance, as well as acoustic sensors. Other sensors can include chemical-biological sensors, and electronic surveillance equipment.

The control systems utilized with current MAVs offer “mission control”, rather than “flying” the aircraft like RC modelers do. The operator, usually an infantryman or a special forces warrior, carry a small laptop or palmtop PC, with a ruggedized “joystick, which enable functional control of the payload, and basic mission commands such as “maintain position” or “go to point” and “come home” etc. Mission specific control features also include “convoy protection“, recently demonstrated by MLB.

All the flight control and auto-pilot functions must be performed autonomously by the aerial vehicle. The MAV must fly itself in calm or harsh weather conditions, including turbulence and wind gusts. Its flight controls include all motion and air data sensors, flight actuators and control surfaces, all driven by the an automatic piloting and control system. Control surface actuators are also driven by electric motors.

Future applications of micro mechanical components (MEMS), ultrasonic devices and piezoelectric actuators are foreseen for future MAVs. Such components are expected to improve reliability, save weight and reduce overall power consumption. Most MAVs are utilizing Global Positioning Satellite (GPS) data for navigation and positioning. Other sensors required for position sensing include angle rate sensor, pressure, accelerometers, and altimeter, to name only a few .

The airborne communications equipment performing video down link and command uplink, is also “hungry” for scarce power resources. The use of miniature, low power high frequency communications, specially designed for such applications, provide an important element in a successful MAV design. As higher the frequencies are, the antennae can be shorter and smaller. Since most MAVs are built of composite materials, antennas can be integrated into the vehicle’s structure to gain maximum coverage and minimize electromagnetic interference between on board radio systems.

While packaging of conventional UAV systems is a secondary logistical consideration, the packaging, assembly and reconditioning of a MAV is an critical aspect for efficient use by the field troops. Several approaches considered for such systems are assembling the aerial vehicle by hand, prior to a mission, firing the drone from a canister, like a missile, or deploying a UAV from a storage/launch cassette. Each of these concepts should enable compact carriage of the entire system in a backpack (drone, ground station and data-links), quick and simple assembly, automatic per-flight testing, and sensor calibration. Systems should also be designed for easy and simple interchanging of structural assemblies, to enable simple and rapid reconditioning of aerial vehicles at the field level.