In 1996 – 2000 DARPA initiated the Micro Air Vehicle (MAV) Program initiative, seeking to develop and test emerging technologies that could evolve into a mission capable flight system for military surveillance and reconnaissance applications. The only requirement was that the dimension of the vehicle should not exceed 15 cm. There were no other restrictions on the design. Inspired by the elegant aerodynamics of flying insects, University of California (Berkeley) engineers responded with the development of a flying robot that weighs less than a paper clip. The micromechanical flying insect (MFI), which is funded by ONR and DARPA, could be used in future search, rescue, monitoring, and reconnaissance.

Another program is the Robofly, a stealth robotic flyer that is about the size of a fly. Squads of roboflies may one day be sent to seek out targets, collect and provide information on damage assessment, or search for chemical and biological warfare agents.

Many variations of fixed wing, rotary wing and flapping flight concepts have all been explored. Various systems evolved from the MAV program, but none of the miniature (<15cm) vehicles devolved sofar into a full scale program. Among the systems DARPA tested were the Black Widow MAV – a 50 gr. circular platform that could loiter on a mission for half hour, and the Hoverfly VTOL 180 gr. vehicle, three axis stabilized miniature vehicle that could cruise for 13 minutes and hover for 7 minutes. 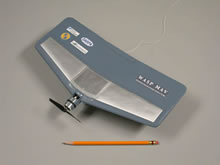 Another platform which was recently tested by DARPA was the Wasp micro UAV – a 32 cm “flying wing” made of a plastic lithium-ion battery material that provides both electrical power and wing structure. The wing utilized the Telcordia synthetic battery material, that generates an average output of more than nine watts during flight – enough power to propel the miniature aircraft for one hour 47 minutes, a world record for MAVs – more than three times the previous record of 30 minutes set in the year 2000. Anoter design tested was the 180gr. The US Special Forces are already using micro UAV known as TACMAV, weighing 340gr. 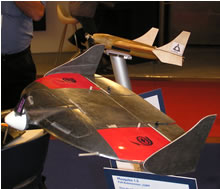 In 2003 Israel also entered the development of micro UAVs, with the first flight of the Mosquito 1 micro UAV. The 205 gr. MAV flew several 40 minute missions, equipped with a basic video camera. The design was improved since and an enhanced system is scheduled for testing later this year, equipped with autonomous flight capability and improved sensors. Another design – MicroStar, was developed by Sanders (currently BAE), demonstrated endurance of 30 minutes, at a mission range of up to 3 km, flying at altitudes of 50 – 300 feet. MicroStar was tested with both electric engine powered by Lithium ion batteries, as well as a 9″ diameter micro turbine jet.

Possible missions suggested for MAVs were squad-level combat, battle damage assessment, air or artillery spotting, sensor dispersal, communications relay, and detection of mines and hazardous substances. MAVs could also be equipped with small jamming systems to confuse radar or communications equipment at very short range. MAVs capable of hovering and vertical flight would be used to scout out buildings for urban combat and counter terrorist operations. A MAV could also be included in a airman’s survival kit, used by a downed pilot to keep track of approaching enemy search parties, or relay communications to search and rescue units. Follow-on to the DARPA MAV program are the OAV.

The current phase of the DARPA MAV program is the Advanced Concept Technology Demonstration (ACTD), ongoing in 2004 – 2005. Its goal program is to further develop and integrate MAV technologies into militarily useful and affordable backpackable systems suitable for dismounted soldier, marine, and special-forces missions. It will focus on the development of MAVs to accomplish unique military missions, particularly with regard to flight operations in restricted environments. The system will provide the small unit with militarily useful, real-time combat information of difficult to observe and/or distant areas or objects in complex topographies such as mountainous terrain with caves, heavily forested areas with dense foliage and triple canopy jungle, confined spaces (often internal to buildings) and high concentrations of civilians. The initial MAV technology development program focused on the technologies and components required to enable flight at small scales, including flight control, power and propulsion, navigation and communications. The MAV ACTD program has broadened the technology development efforts, including multi-purpose structures, advanced communications and information systems, high performance computer technology, Micro-electro-mechanical Systems (MEMS), advanced sensors, advanced electronic packaging technologies, and lightweight, efficient high-density power sources.