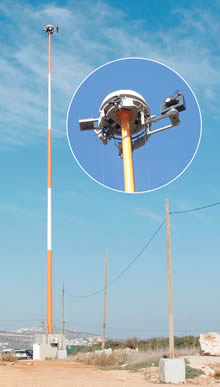 Automatic infrared systems can augment, and sometime replace radars in certain missions. Typical systems are the ADIR, from Elbit Systems and Spider or CEDAR from Controp. Such systems are comprised of a FLIR installed on a rotating plate, scanning a sector of up to 180 degrees, detecting suspicious targets, tracking them and triggering alerts after targets are identified as hostile. The system can track suspicious targets without setting an alarm, until their behavior becomes threatening or as they enter a high security zone, thus enabling effective operation in populated areas. The main advantage such system has over radar is the fact that it actually produces an image, for alarm verification.

Even when an effective sterile buffer zone is established between the forces and the surrounding inhabitants, troops must maintain close contact with the population on checkpoints, roadblocks etc. Utilizing advanced technology, such contact can now be initiated at extended range, enhancing the protection of soldiers while also improving cross-language communication. Utilizing the Long Range Acoustic Device (LARD), troops can issue a verbal challenge with instructions at a distance in excess of 500 meters. In Iraq and Afghanistan, LARD systems are integrated with the Phraselator vocal translator, to transmit hundreds of messages in Arabic, and Afghan Pashtu languages. LARD employs directed acoustic signals to which enable troops to communicate over an acoustic beam 15-30 degrees wide, transmitting clear voice or other audible signals.

Non-lethal weapon systems can be employed in the “sterile” zone, to act as early warning and deter innocent people from entering the restricted area. Non lethal area denial weapons are ranging from sticky or slippery foams and liquids, eliminating movement within buildings, or streets, to stun guns and electronic shock inducers, used to immobilize vehicle’s electrical systems. Two of the most recent area denial systems are the M-5 Modular Crowd Control Munition (MCCM) and Taser Anti-Personal Munition (TAPM) both are a less than lethal mines, MCCM is loaded with rubber balls instead of steel pellets exploding when triggered by tripwire or sensor input. TAPM uses Taser electrical shock devices and can disable any human target by remote control or self activation. Such devices are used to deter, disorient and temporarily incapacitate assailants, separating them from innocent bystanders. Further into the future, troops could utilize Active denial System (ADS) directed energy non-lethal weapon system developed by Raytheon for the Air Force Research Labs. ADS projects a focused millimeter wave energy beam which induces intolerable heating sensation on an adversary’s skin and cause that individual to be repelled without injury. ADS could be used to stop, deter and repel hostile elements without applying of lethal force.