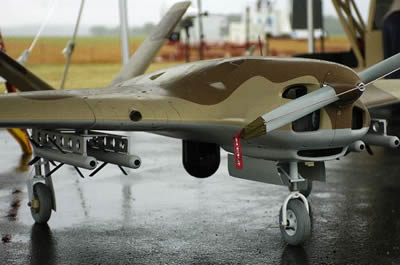 Patrolling highways in hostile area, while protecting convoys is part of the regular mission of UAVs in Iraq. Relying on continuous communications and positioning from blue force tracking systems, UAVs can cover a convoy, controlled from ground control stations at distances of up to 100 km. However, a more suitable solution is to use a small UAV loitering overhead, equipped with ground surveillance systems to monitor the area ahead of the convoy forewarn ambushes or suspected IEDs lying ahead. Such systems were demonstrated by several manufacturers at the UAV Battlelabs. One of the system, the Boeing/Insitu ScanEagle unmanned aerial vehicle (UAV) could be used for convoy protection in Iraq before the end of 2005. 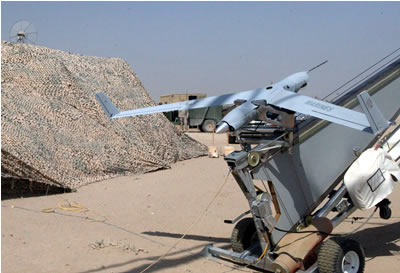 New sensor suits are evaluated for these missions, providing situational awareness and early warning of hostile intent. Such sensors are including close coverage by acoustic gunshot detectors, such as the ShotSpotter, which automatically slews the UAV’s camera to source of fire; EO/IR imaging sensors offer coverage at longer range, and enable the UAV to fly ahead of the convoy, providing early warning about potential threats. Synthetic aperture radar can also employed by “sweeping” roadsides from long distance, detecting changes in the terrain, which could indicate IED locations. To better coordinate between the UAV and the convoy, the UAV or its sensor has to be controlled from the moving vehicles, providing continuous feed of video imagery while on the move. The UAV can perform several tasks automatically, including Continuous Change Detection (CCD) processing and moving target detection. Advanced operating modes enable the UAV to autonomously maintain a fixed distance ahead of a convoy, by following the route and GPS location of the ground station (security team).