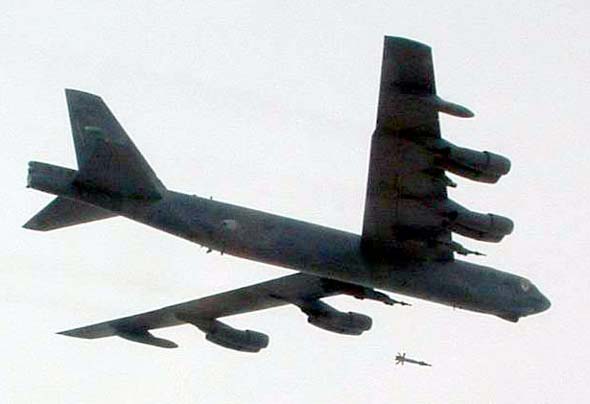 The B-52 also has a significant standoff capability but like the B-1B, it is usually operated after total air superiority has been established. B-52 bombers are becoming a valuable assets for close air support operations. This old workhorse can maintain position high over the battlefield, loaded with precision guided weapons which are employed against individual targets designated by special forces teams on the ground.

Targets can be designated by laser for pinpoint attack by laser guided weapons or by GPS coordinates, which are used to guide JDAM or JSOW weapons. B-52s can also carry target designation equipment, such as the Litening II targeting pod, for self-designation of targets for autonomous engagement. The B-52H is currently undergoing a mid-life update program which focuses mainly in avionics improvements.

December 8, 2006: Boeing will provide Alternate Mission Equipment (AME) avionics for existing B-52s, to support the introduction of new systems to support the AGM-142 Have Nap missile and other guided weapons on board. The AME doubles the size of the current display, which is associated exclusively with the AGM-142. It provides a color monitor, compared to the current black and white, and will enable the B-52 to utilize laser guided weapons in a way that is not available today.

B-52H are receiving regular updates to maintain its effectiveness at war. Of particular importance is the replacement of outdated avionics with new systems. These programs replace very expensive systems that are no longer available with advanced avionics, based on off-the-shelf elements. Sometime these new boxes are derived from other systems, yielding dramatic savings in costs and maintenance while improving performance. Among the recent modernizations was the introduction of new defensive system, which saved valuable space and power, clearing space for new systems in the rear cockpit.

Provided with virtually unlimited carrying capacity and space, the bomber is considered as a useful platform to host a range of intelligence collection ‘non-traditional ISR’ (NTISR) systems, and communications support offering direct access to supported elements on the ground. While the bomber itself is not considered for penetrating missions, its ability to remain on station for extended missions, carry massive loads of weapons, precision attack sensors (targeting pods) and support systems make it an indispensable support asset for asymmetric operations worldwide.