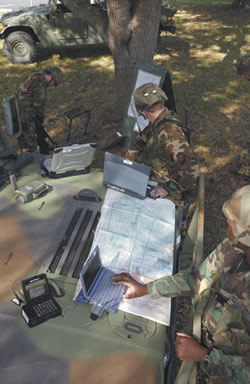 Tactical Operations Centers (TOCs) employed by the US Army and Joint Operations Center, designed to command and control joint operations at theater level, consists of an integrated group of tents and wheeled and/or tracked vehicles with shelters from which a commander and staff plans, monitors, and directs the tactical operations of assigned forces in any military operation. The TOCs provide facilities for planning, communication, and visualization tools where commanders and their staffs can access information resources from tactical through national levels to render an integrated, comprehensive view of the battlespace.

A Tactical Operations Center (TOC) consists of multiple platforms (vehicles or tents) comprising of integrated communications combining data, video, and voice communications networks, information management, and computing equipment designed for the tactical environment. Information management applications provide access to, and display of situational awareness information to the commander and his staff. TOC systems are include legacy systems such as the Army Battle Command System (ABCS), SINCGARS radios, and Common Hardware Systems (CHS), including video displays, tactical faxes, and commercial-off-the-shelf network equipment. Interoperability between Combat Information Centers (CICs) of different services was demonstrated during Force XXI through the fielding of the 1st and 2nd digitized Divisions, and is again being called on during the Army’s Unit of Action/Unit of Employment (UA/UE) restructure.

Prophet Enhanced – a New Tactical SIGINT for the U.S. Army