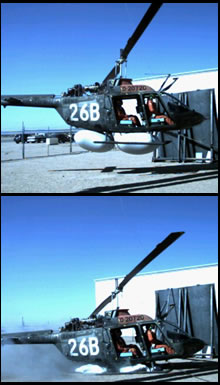 The tests took place near Phoenix, AZ on Bell 206 rotorcrafts. Two drops were conducted at a maximum gross weight of 3300 lbs, at impact velocities of 27 and 34 ft/sec (1,600 and 2,000 ft/min). The helicopters were equipped with four ATD’s (Anthropomorphic Test Dummies) simulating human passengers. The “passengers” were in tact after each drop. In addition the tests proved that due to the REAPS airbags, the passengers were subjected to an impact of less than 25G with absolutely no rebound and secondary impact. As for the helicopters, according to Mr. Ken Bennett, a helicopter specialist at HeliWorks, Pensacola FL, who participated in the tests as part of the survivability evaluation team, both helicopters were in a repairable state following impact. and the airframe experienced limited damage.

According to Dr. Benjamin Keren Corporate VP and General Manager Ordnance Systems Division at RAFAEL. “We foresee REAPS becoming an FAA certified standard component in all passenger rotorcraft; both in the civilian and military arenas, significantly decreasing the amount of casualties and damage so prevalent in helicopter crashes today.”