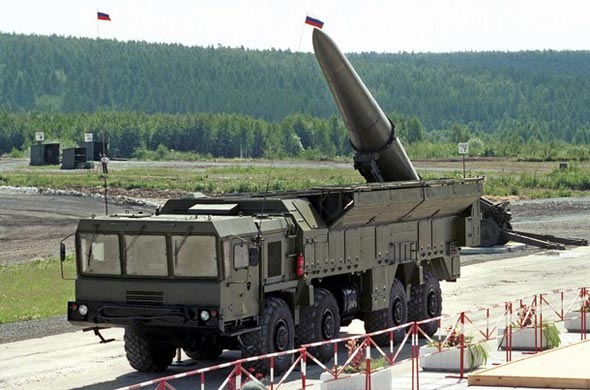 The Iskander Tactical Missile System is considered to be among the most advanced surface / surface missiles available today.

Iskander-E is the export version of the Iskander M (9M72) short-range ballistic missile currently in service with the Russian Armed Forces (known by NATO designation SS-26). An earlier version is the SS-21 Tochka/Scarab, which was extensively used by the russian Army during the 2nd Chechnya war and during the conflict between Russia and Georgia in August 2008. The missile is designed for mobile, autonomous operation and is capable of striking point and area targets at ranges of 50 – 280 km. (The M version is believed to have a range of 400 km). Typical missions include the engagement of enemy fire support, such as MLRS and long range artillery, air defenses and missile defense assets, airfields, command, control and communications nodes and infrastructure targets.


The Iskander-E missile is a single stage, solid fuel missile weighing 3.8 tons, carrying a payload of 480 kg. it can be loaded with cluster, blast-fragmentation or penetration warheads. A Thermobaric warhead is also believed to be part of the missile’s warhead options. An unconventional warhead could also be an option, including a tactical nuclear warhead.

The missile uses on-board navigation and flight control to shape its ballistic trajectory at the boost and terminal phases of its trajectory. Boost phase maneuvering enable the missile to correct the ballistic trajectory to best match the flight plan and mission (for example, to minimize detection range by enemy missile defenses). It also contributes to optimize the trajectory based on in-flight data. Terminal maneuvering is used to avoid missile defenses and further improve the hit accuracy, utilizing terminal sensor. According to Russian sources, the missile uses special composite materials to reduce the radar signature of the missile (or TEL?) to evade targeting radars employed by enemy surveillance sensors, UAVs and smart weapons.

The missile is equipped with an autonomous inertial guidance system and is reported to use an optical seeker for terminal guidance. The Iskander-E system is combined of six types of vehicles. The Transporter-Erector-Launcher (TEL) is based on the new BAZ6909 eight wheeler truck chassis. Fully loaded with two missiles, a TEL weighs 40 tons. The transporter loader also carries two missile reloads. The mission preparation station is equipped to process intelligence data, converting it to target data fed to the missile’s navigation system. Command and staff vehicle, maintenance and life support vehicles complete the Iskander’s unit. The TELs will remain in concealed position throughout the mission preparation, and require only a brief exposure to an open area to erect and fire one or two missiles. After launching, the vehicle immediately leaves the area seeking the safety of another concealed area.

In May 2007 Russia conducted a test firing of an Iskander M missile in response to heightening tension due to continued U.S. plans to deploy missile shield elements in Europe, and the opening of a missile defense interceptor bases on the Baltic coast in Poland and establishment of an ABM radar station in the Czech Republic. Monitoring data show that last week’s tests of the Russia’s new Iskander-M (SS-26 Stone) missile were successful. According to, Sergei Ivanov, former defense minister, and current first deputy to the Russian prime minister, monitoring data, including photographic evidence, determined that the deviation of the missile from the target point was one meter. The missile was reported to be able to carry multiple warheads.

In August 2008 Russian Ambassador to Belarus Alexander Surikovinformed about Russian plans to deploy Iskander missiles and/or bombers (most probably Tu-22) to Belarus, in response to the planned deployment of the U.S. missile defense shield in the Czech Republic and Poland. About one week later, Russia used Iskander missiles against Georgia as part of the conflict between which broke up between the two countries. By November 2008 Russia again employed its ‘Iskander strategy’, publicly assessing the deployment of the missiles in the Kaliningrad region, near its Western border with Poland, in an effort to deter the Polish government decision to deploy American missile defense systems on its land. From these positions, Iskander missile systems with a range of 500 km (310 miles) could target the entire territory of Poland and also parts of Germany and the Czech Republic.

The R-500 is a new cruise missile adapted for the Iskander launcher. This missile was previously used only with tactical ballistic missiles. It is designed to operate at ranges of up to 280 km (170 miles), flying a radar-evading trajectory, and, reportedly, achieve an accuracy of three meters CEP.