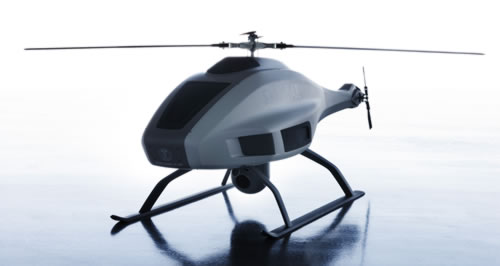 Saab launched at Eurosatory 2006 the Skeldar V-150 lightweight unmanned helicopter, designed for military and commercial applications. The Skeldar is currently in final testing and is expected to be ready for operational use by mid 2007. The maximum takeoff weight of the Skeldar is 150kg, including 55 kg of fuel and payload. It can fly a 4 – 5 hour mission, up to a range of 100 km, dashing at maximum speed of 100 km/h. The basic system includes two unmanned helicopters, EO/IR payloads and a control station. The platform can accommodate an optronic, stabilized payload, or a SAR or various electronic sensors (ELINT, EW etc.) Saab is working with the Swedish Airworthiness Authorities to establish the necessary procedures and regulations to certify Skeldar UAVs to operate in civilian airspace.

The Skeldar is designed to take off and land vertically, and maneuver precisely even in tight airspace. The system uses a water cooled two cylinder, two stroke fuel injected gasoline engine located in the front of the fuselage. The rotor system uses a Bell-Hiller configuration, with stabilizer bar and paddles. Navigation is performed by redundant GPS and IMU system, air data and magnetic heading indicator enabling autonomous operation while maintaining total radio silence.