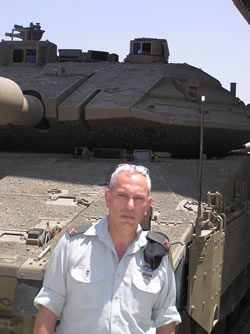 The Merkava tank program started in 1970 after the IDF was forced to consider an alternative to the cancelled project for producing British Chieftain tanks under license, which had been cancelled by the UK at the start of the 1967 War.

Although the Merkava tank is produced at a final assembly plant managed by the IDF logistics and support corps, only 11% of the program’s work is actually performed by the military. “75% of the vehicle is provided by the local defense industries. An additional 14% is imported. Only 11% of the work is done here,” says General Amir Nir.

According to the PMO, the development of the tank was significantly less expensive than any of the alternatives. According to Nir, over 200 industries and 3,000 employees directly support the program. Furthermore, the income from the export of technologies derived directly from the program have already exceeded the development costs, and have consistently covered the annual production costs of the tank.

“We pursue a telescopic process in the development and production of the tank. We field the early models and use the feedback from the field to improve the product throughout its life cycle,” General Nir told Defense Update. “This telescopic method has consistently proven to yield the shortest development cycle in the industry. In specific cases it takes only days, compared to years, to provide a quick fix for an urgent operational requirement. We then prepare for a more comprehensive solution to be introduced on the production line for subsequent production lots.”
An example of the telescopic development process is the status of the current Merkava Mk 4. The design of this tank actually began some 15 years ago with small investments in ‘seed’ projects supporting developments such as the MTU/GD 833 1,500 hp powerpack in Germany, the transfer of its production to the USA and the development of improved armor and firepower. When the Merkava Mk 4 tank entered production, it was already fitted with the load capacity, electrical, and computational power to support many systems which are currently still on the drawing board. As the tank entered production in the year 2000, it met only 60% of its planned development goals. “We found that it would take us about eight years to stabilize a program and bring it to its full capability,” says Nir. Yet, the first unit was operational in 2003, and full scale production is currently underway with many improvements received from the field and implemented as retrofits and on the production line.