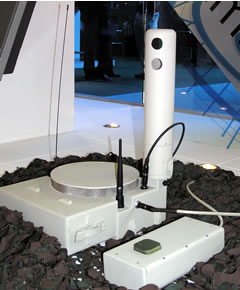 Terrain Commander (TC) (left below) and Terrain Commander 2 (right below) are network enabled surveillance systems, used for military intelligence gathering and battlefield surveillance, force protection, perimeter security, border control. The TC system’s base unit is a self contained 11 kg platform and 6kg payload, both fit well into an oversized backpack and is deployed in minutes and can operate continuously for up to three months.

The Optical Acoustic SATCOM Integrated Sensor (OASIS) payload is an autonomous, day and night multi-sensor suit, which includes electro-optical day/night and acoustic sensors; these can be augmented by additional Miniature Intrusion Sensors (MIS) such as passive infrared, magnetic, seismic and piezoelectric (pressure) sensors which can be deployed up to 300 meters from the OASIS base unit, communicating via wireless links. The system can recognize a personnel size target (day or night) at a range of 150 meters and a vehicle at 500 m., where it is also detectable by the acoustic sensor. A tank target can be detected by acoustic signals at a range of 2.5 km, while a helicopter will be picked up at 10 km. the acoustic detector electro-optics recognition range.

Enhanced OASIS sensors provide vital battlefield intelligence as they monitor the battlefield deep inside enemy area or monitor sensitive locations which are unattended by security forces. They provide automatic detection, classification, capture and processing of images of activities in their area. Images and data are transmitted in real time to Command and Control Station (CCS) where feeds from several sensors are compiled and monitored. Target data can be displayed as maps, static images as well as multi-frame sequences, which can be used to detect obscured targets by their motion.

The new version from Textron Systems is Terrain Commander 2. It is comprised of more compact, lightweight elements  weighing a total 4.4kg (9.8 lbs). Terrain Commander 2 can operate autonomously on a single battery pack for 30 days. Mission duration can be further extended with auxiliary power pack. TC2 can detect vehicles at a distance of 500 meters and helicopters at 10 km distance, recognizing a human target at 150 – 500 meters and vehicles, at 0.5 – 1.5km. It will detect any tampering attempt.