A demonstration of cooperative mission performed by multiple aerial vehicles controlled by a small team from a single ground station represents a major achievement and technological leap for unmanned aerial systems. This achievement is even more impressive as it was accomplished by the privately owned and financed company, Proxy Aviation, who’s CEO Don Ryan is a great believer in the future of autonomous, tactical uamanned aerial systems.

“We identified the operational need for tactical, armed unmanned systems operating autonomously and collaboratively on the future battlefield. We decided to develop the critical elements fulfilling those needs based on our own funding, to ensure we keep the intellectual property for those technologies.” said Ryan in an interview with Defense Update. 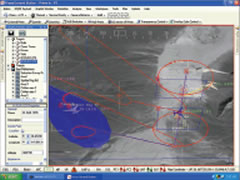 These systems began with the modification of a ‘home built’ experimental aircraft, and led to a specially designed platform known as SkyRaider, which already proved itself in test flights. During the tests, SkyWatcher and SkyRaider unmanned aerial vehicles demonstrated cooperative flight capabilities, managed the SkyForce Distributed Management System (DMS). The Cooperative Rules Based Reconnaissance Unmanned System (CRBRUS) demonstration was held for ten days in early July 2007 at Creech Air Force Base, Indian Springs, Nevada, where SkyRaider and Skywatcher, joined by two simulated aircraft were sent on an ‘IED hunt’, operated by a single SkyForce DMS. Through several hours, the UAVs succeeded to locate all five IEDs hidden along the roads.

“The CRBRUS program demonstrated the advantage of having complementary sensor types operating in concert from their ‘sweet spot’ altitude and flight pattern, merging the derived information. The combined effect was enhanced target validation and reduced kill-chain timeline. The demonstration results provide clear-cut evidence for both the effectiveness of this approach and the far-reaching potential it holds,” said Don Ryan, CEO, Proxy Aviation.

“A flight of four SkyRaiders, controlled from a single ground station can carry the same ordnance carried by a single Reaper (Predator B), but cover much larger area, maintain longer time over targets and offer higher redundancy, all that at the same cost.” Says Ryan, Proxy Aviation CEO. Although the Reaper can climb to an altitude of 45,000 ft, when fully loaded with weapons it will descend to lower altitudes, “When fully armed with a payload of 800 kg, the SkyRaider’s ceiling is 20,000 – 22,000 ft, similar to the ceiling of the armed Reaper. ” Ryan told Defense Update.

One of the main advantages offered by the Proxy Aviation system is the SkyForce ground control system, designed from baseline to operate multiple aircraft. This system can operate as many as 12 airborne UAVs and 20 ground nodes concurrently. Therefore, a flight of four SkyRaiders can be launched on a patrol, covering a large area assigned with complex flight patterns and missions, while controlled seamlessly from a single control unit, thus limiting the manpower and logistical footprint to the minimum. The SkyRaider aircraft is designed as a robust platform, capable of operating from forward, semi-prepared airstrips. At AUVSI the aircraft was demonstrated with a mockup of FLIR System’s Safire HD payload.

Each aircraft will be able to carry four Hellfire missiles or an equivalent payload of precision guided ordnance, such as the Viper Strike munitions. Hardpoints for the weapon’s pylons are installed in the wing strakes, which are strengthened to carry the extra load.