In most modern armies, the standard post WWII five tank platoon organization has been changed to either four or three vehicles per platoon/troop. The original concept behind the five tank platoon was to have two separate fire and movement sections, with the platoon leader joining one at will, as required by the combat situation. Postwar developments envisaged not only a shortage of tank crews, but also a significant reduction in funding, both requiring restructuring of tactical sub-units. Moreover, the technological advances made in modern battle tank design have allowed a reduction in the number of vehicles, while maintaining the same, or even superior battlefield performance. The Israeli army, which has had substantial experience with tank warfare in the post WWII period, has shifted from five to four and finally three tanks per basic platoon, in order to increase the number of gun tubes deployed per tank company. The original IDF tank unit structure, which was developed for open desert tank warfare, was an 11 tank company (3 tanks x 3 platoons + 2 HQ tanks) allowing IDF tank units to have 8 gun tubes firing and three tanks moving at all times. This structure proved particularly suitable for high attrition tank versus tank engagements. Under the current IDF reorganization program, there have been some thoughts of reducing the Merkava Mk4 companies to seven vehicles. (1 HQ vehicle) This structure, made possible by these tank’s advanced technology and enhanced capabilities, is being considered because it would allow two tank sections to operate autonomously.
The US Army has adopted the four tank platoon, rejecting the three-tank solution in order to maintain the two sections of two tanks support mode.

The basic Russian T-72/80/90 tank platoon is still their traditional three vehicle formation, however, there are reports of a new concept being examined, under which a five AFV platoon will be established, with four tanks and a BMPT as the fifth vehicle. The BMPT is an entirely new class of vehicle known as a Tank Assistance Combat Vehicle. The Russians claim that this vehicle, by supporting the MBTs, increases their combat efficiency by 30%. The BMPT deals with all secondary targets, allowing the MBTs to focus on engaging the ‘heavy’ targets, which their main armament is designed for. The BMPT, based on T-72/-90 hulls, mounts an array of advanced anti-tank and anti-personnel weapons. These weapons systems include eight launchers mounting a combination of AT-9 Ataka guided anti-tank missiles or Igla short range air defense missiles, 30mm automatic cannon, multiple 30mm automatic grenade launchers and 7.62 machine guns. 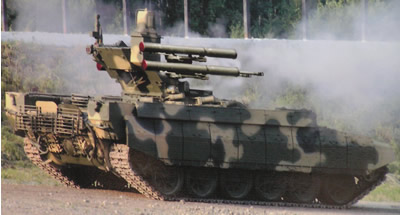 Combat experience in urban fighting has clearly demonstrated the advantages of the four tank platoon. Fighting through narrow alleys, where tanks operate in two tank sections supporting infantry, a three tank platoon would not only be inadequate, but also uneconomical, as the remaining single vehicle would in most cases be left behind, or not effectively used by the infantry commander, making it highly vulnerable to enemy tank killer teams. The alternative would be to use all three tanks of the platoon together, which would probably provide more firepower and more control problems than necessary. In addition, although the infantry commander may have the best intentions, his true function, and the one he has spent the most time training for, is controlling his own troops, not a tank or group of tanks temporarily assigned to his unit.
From a purely economical viewpoint, reverting to the four tank platoon and 13 tanks per company would eliminate the second HQ tank, leaving a single tank for the company commander. The second HQ vehicle could be replaced by an APC or AIFV, capable of fighting and moving with the company, but with superior C4I facilities on board.

The British army tank squadron has a 14 tank structure with four troops (platoons) of 3 Challenger II tanks and two tanks in the HQ section. These four troop squadrons give the squadron leaders the choice of forming two-tank sections, although in some cases with the two tanks coming from different platoons, without creating too much degradation in the squadron command structure, or leaving single tanks vulnerable, as might happen with a three-tank by three platoon company.

The US Army has several basic scenarios for task organizing a small unit combined task force for urban combat.

The Tank Platoon as a Maneuver Element

In this scenario, the tank platoon leader is responsible for coordinating the maneuvering of his tanks. Using this task organization, likely missions for the tanks would be to provide fire support or overwatch for the movement of infantry units. This is also the most difficult of these methods to control because of the effort required to coordinate the movements of the two types of units. The tank platoon leader may choose to maneuver his platoon in sections. (Two tanks each from a four tank platoon) This provides greater flexibility in supporting the infantry during combat, but places greater responsibility on the NCO commander of the ‘light’ tank section when operating independently with the infantry commander. (The advantage of an experienced NCO in this situation is clear. The availability of tank commanders with the required level of experience in mandatory short-service armies can present a problem.)

In this scenario, tanks platoons are broken down into two sections, each section being placed under the operational control of an Infantry platoon leader. While this technique is very effective in maintaining the same rate of progress for the tanks and infantry, it requires pre-mission training in tank combat control for the infantry platoon leaders. Normally, tank crewmen resent this kind of control, as the infantry commander will, in some cases, prefer to assign single tanks (not co located with the infantry) to provide close support. This endangers the tanks because they are vulnerable to tank killer teams in any kind of terrain that is not open.

In this scenario, the company team commander places one or more infantry squads under the operational control of a tank platoon leader. This technique is very effective in relatively open urban terrain where a tank platoon can operate as a unit, with the infantry providing close-in protection against enemy tank-killer teams. This is the tank commander’s preferred option as it allows the tanks to operate under the most ideal conditions available to them in urban combat, where they are especially vulnerable to close range attacks. This technique requires that junior tank unit commanders be pre-trained in tank-infantry cooperation down to the section-squad level. The platoon commander co-ordinates the unit’s firepower using various methods, the best of which is via the infantry coordination phone mounted on the rear of the tanks. These external phones connect the infantry leader into the tank’s communication system allowing them to communicate directly with the tank crew, or the tank platoon commander even if he is in different tank.