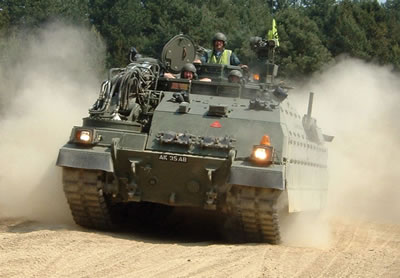 The UK Ministry of Defence (MoD) unveiled in November 2006two of the new combat engineering armored vehicles destined for service with the British Army. 33 Trojan counter-obstacle vehicles and 33 Titan bridge-layers are being produced under a £250 million contract with BAE Systems Land Systems. The Army plans to operate 66 of these vehicles with its combat engineering regiments. All 66 vehicles due to be delivered by 2008. The new vehicles will replace the Chieftain based Armored Vehicle Royal Engineer (ChAVRE) and the Armored Vehicle Layer Bridge (ChAVLB) currently in service.

The combined capability of Trojan and Titan can overcome almost every obstacle on the modern battlefield – from breaching minefields to crossing gaps such as rivers and chasms. Trojan can plough through minefields, dig trenches and defensive ditches while Titan can lay a bridge over a 26 meter gap in two minutes whilst maintaining full crew protection – giving operational commanders a potentially battle-winning edge, with the fastest bridge-layer in the world. 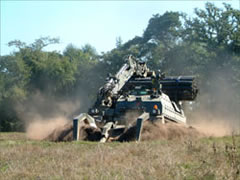 Titan will carry and lay the current range of in-service close support bridges, laying them faster, and in a wider variety of terrain conditions, than previous equipment. Both vehicles are designed to mount and tow the current range of in-service Royal Engineer equipment (Python, AVRE Trailer, Track/Full Width Mineploughs and earth moving blades).