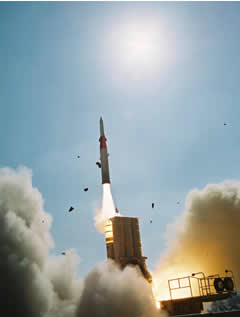 In recent years, new tactical missiles and rockets designed for short range have added a numerical and qualitative edge. “A tactical weapon that threatens a third of our population and most of our strategic sites cannot be regarded as mere ‘tactical’, it becomes a strategic threat. There is no clear definition between a rocket and a missile. They carry almost the same payload and reach the same range and thus, should be addressed equally by defensive means” states Arieh Herzog.

Typically, such weapons have a range between 70 and 200 km, flying through short, relatively flat and low ballistic trajectories w making intercept much more challenging. Like the medium range ballistic missiles such weapons carry warheads of 100 up to 600 kg which can cause significant damage. On the other end of the scale, Israel is facing a “low tech” but equally dangerous threat from short range improvised rockets and mortars. These weapons are also employed as part of the asymmetric terror warfare, by Iranian- and Syrian-backed Palestinian and Lebanese terrorist organizations. The firing of rockets on Israeli territory, by terrorists from Palestine and Lebanon is characterized as a new type of “cross-border terrorism”, which, if not countered effectively, can spread to strategic locations in the densely populated narrow coastal area. At present, there are no effective means to counter such threats, although some promising technologies are over the horizon.

“We are expecting new defensive systems to evolve in the next few years, to provide effective answers to such challenges. 2005 marked the initiation of this process, as the US congress earmarked funding for the Short Range Missile Defense (SRMD)” Herzog told Defense Update.

Responding to the challenge of short range threats is the Nautilus laser interceptor system, a joint US-Israeli program developed over the past few years. In its first live-fire test in June 2000, the system shot down a single Russian-made Katyusha rocket. Two months later, the system shot down two Katyushas simultaneously. “Directed energy is ideally suited to be used against such short range, short flight targets”, says Herzog, “Nautilus, based on chemical laser technology is practically terminated, but other systems, based on solid state lasers continue development in the US. Israel is pursuing several directions, to defend against such threats. Based on local know-how, Israel could pursue similar development to protect its cities and military forces from rocket attacks, if the current situation continues”. In July 2006, a delegation from Northrop Grumman presented the new deployable Skyguard system to the Israeli MOD. Skyguard is based on the THEL concept, utilizing modern systems and is designed to be operated by the military.