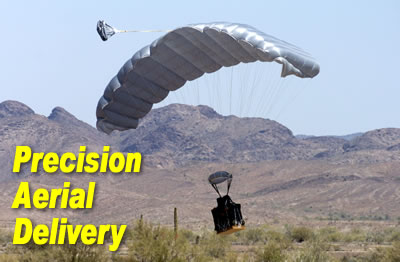 Heavier classes of Joint Precision Airdrop System systems are planned for fielding in the near future. These include the JPADS-L (Light), supporting cargo loads of up to 10,000 lb. rigged weight capability. In 2006 precision air-drops of 6,000 to 10,000 lbs (2.7 – 4.5 ton) guided cargo pallets was demonstrated by the joint military utility assessments (JMUA) at Yuma Proving Ground in Yuma, Ariz., delivering simultaneous drops of two to three loads to separate drop zones. According to Army Lt. Col. Ralph Saunders, operational manager for the JPADS ACTD, the final assessment of this class of JPADS systems is scheduled for May 2007 followed by induction of such systems into the current forces. Several systems are considered for the JPADS-L role. Firefly and Dragonfly parachute systems developed by Para-Flite, a member of the Airborne Group, are capable of precision delivery of payloads up to 10,000 lb (4.5 ton) from altitudes up to 25,000 ft.

JPADS program is also expected to examine systems capable of accurately delivering weight bundles smaller and lighter than the ‘XL’ class. Currently there is no JPADS classification for systems under 500 lbs. but, according to Rick Zaccari, Vice President, Business Development at Atair, there are indications from military tacticians that 100 to 500 lbs precision airdrop systems will be a critical JPADS weight class, specifically for the resupply of small deployments of Special Forces and other advance ground forces. Atair is already offering Onyx systems capable of delivering 500 and 20 lbs payloads.

Follow-on developments are pursuing larger payloads. The JPADS-M (Medium) will enable air delivery of medium weight loads (up to 30,000 lbs / 13.6 ton), enabling high volume re-supply of fuel and ammunition – capability gap identified by the Army. JPADS-M will also enhance the potential strategic deployment airdrop capability to overcome the maximum-on-ground (MOG) limitations, such as high volume supplies and combat equipment. These loads will be configured for ground handling by the Palletized Load System and Load Handling System (PLS/LHS), as well as the related, emerging technology program Smart Distribution – Modular Intermodal Platform (MIP). A medium weight precision offset airdrop capability will provide the required “never-too-late” supply and distribution capability that the widely dispersed combat teams of the Future Force will require in the first days of a conflict, enabling them to increase their operational agility. In addition, it will increase strategic deployability, while decreasing detectability and vulnerability of the delivery aircraft and Troops.

Simply scaling up existing technology will not be possible. According to JC Berland, President of Para-Flite, the 30,000 lbs program will require a completely new approach to ram air canopy deployment and control. Joint Precision Airdrop Systems allow autonomous delivery of cargo from high altitudes and significant standoff. Para-Flite’s current systems are capable of deployments to 25,000 ft in altitude and horizontal separations of over 30 km. This separation increases safety for aircrews and enhances the security of forces on the ground. The largest system called MegaFly can carry up to 30,000 lbs.

In the future, JPADS program will encompass an even heavier class, supporting rigged weights of up to 60,000 pounds, enabling the delivery of medium weight combat vehicles such as the Stryker and some of the FCS type vehicles.