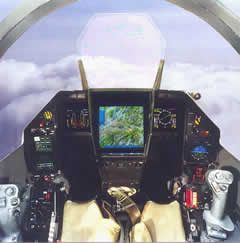 Thales has developed the RBE2 AESA, an enhancement of the multi-function radar installed on the Naval Rafale. This radar is already designed to accomodate AESA front end. Thales launched the development of an AESA derivative for the Rafale in 1997, the program began developmental testing with Rafale aircraft in 2003 and 2004.

As of April 2007, Thales AESA RBE2 entered production engineering, following the conclusion of a series of flight tests on Mirage 2000 test-bed aircraft. Integration and testing of the AESA radar on board the Rafale are planned for the second quarter of 2007. Series production start-up is scheduled for late 2010. In October 2006, the French Defence Procurement Agency (DGA) and the industry team behind the Rafale program agreed to a roadmap that will deliver Rafale fighters equipped with a new generation of sensors, including the AESA RBE2 radar, to the French Air Force and Navy by 2012.

AESA design offers electronic scanning of the radar beam on both plans, (vertical and horizontal) offering new capabilities beyond the reach of conventional radars. These systems enable the simultaneous designation of multiple targets to different air-to-air missiles, while performing searches in directions completely independent of the target tracks. The level of situational awareness provided by AESA radar far exceeds anything available with conventional radars. RBE2 uses electronic scanning technologies to improve the aircraft low-altitude penetration capability by generating 3D ground map covering a wide area forward of the aircraft, supporting terrain following and maneuvers in the horizontal plane within the area scanned by the radar. The radar will also offer a high resolution ground mapping mode.