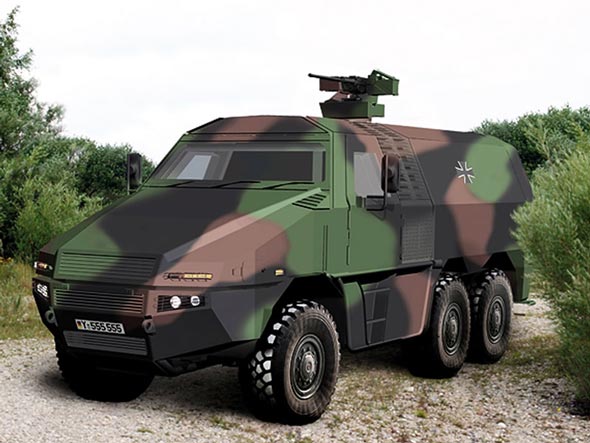 Grizzly is designed to meet the German Army’s “Class 4” protected command and role-specific vehicles, with a gross vehicle weight of 25 tons. So far the German Army could use only a smaller platform – the Dingo 2 (12.5 tons) or the much heavier 33-ton BOXER. The vehicle is sized to be air transportable on the A 400 M transport aircraft.

Grizzly can carry 10 fully equipped troops, exceeding by more than 50% the 3 tons required in the German request for proposal (RFP). The vehicle is protected in all directions. The driver´s station and crew compartment form an integral safety cell providing protection against improvised explosive devices (IEDs), projectiles, missiles and mines. The cell’s frame also forms a cage which contributes to the crew safety in case of rollover. The engine compartment and transmission are ballistically protected to reduce the risk of ‘mobility kill’ under attack.

The vehicle uses a diesel engine developing 331 kW, accelerating the Grizzly up to a speed of 90 kph on road. Its radius of action exceeds 700 km. KMW is offering the vehicle in several configurations, including command post and ambulance variants. The design is based on an intelligent modular concept which, beside the current 6×6 version, could also accommodate a smaller 4×4 model as well as an 8×8 type of correspondingly higher payload.