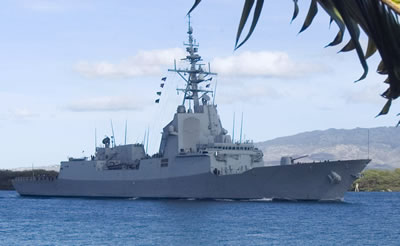 It was the first time that an SM-3 was fired from a destroyer. Previous tests involved missiles launched from Aegis cruisers. The exercise was the first to involve Aegis ships from three nations, operating together to test the performance of their combat systems against a variety of naval threats. It was the third intercept of a medium-range target with a separating re-entry warhead and the ninth successful intercept for the Aegis Ballistic Missile Defense program. The test represents the Aegis BMD system’s ninth successful ballistic missile intercept in 11 attempts.

In addition to USS Decatur, the Aegis BMD Cruiser USS Port Royal (CG 73) and the Spanish Navy Aegis-equipped frigate Mendez Nunez (F-104) participated in the test as a training event to assess the future capabilities of the F-100 Class. USS Port Royal used its SPY-1B radar, augmented by a prototype Aegis BMD Signal Processor (BSP) to detect and track the separating warhead in real time, and to differentiate (discriminate) the simulated warhead from the rest of the missile. The test validated the BSP’s advanced discrimination capability against complex threats. The system is scheduled for installation and deployment as part of the next configuration of Aegis BMD capability beginning in 2010. USS Port Royal also exchanged tracking data with a ground- based Terminal High Altitude Air Defense (THAAD) system positioned ashore. Minor modification made to the Aegis Weapon System installed on the Mendez Nunez enabled the vessel to detected and track the ballistic missile target during the test.

The SM-3 Block IA provides increased capability to engage short-to- intermediate-range ballistic missiles. The SM-3 Block IA incorporates rocket motor upgrades and computer program modifications to improve sensor performance, missile guidance and control, as well as lower cost. It also includes producibility and maintainability features required to qualify the missile as a tactical fleet asset. Accroding to Frank Wyatt, Raytheon’s vice president of Naval Weapon Systems the program has already delivered more than 23 operational SM-3 rounds to the navy. “We are ramping up our facilities and suppliers to accelerate deliveries of this urgently needed capability to the fleet”. said Wyatt.