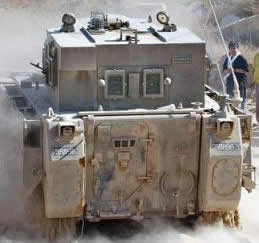 Encountering significant threats in its theatre of operations, the IDF formulated an armored vehicles roadmap that will secure its forces the levels of mobility and protection they require for counter terror operations. Some of the M113 operated by the IDF were installed with raised armored fighting positions (Kasman – shown on left photo). Improved protection suites were also designed for the vehicle and by IMI, utilizing the hybrid (passive-reactive) armor. This armor kit was selected by the IDF few years ago but the program was later shelved due to lack of funding.

More recently, IMI’s Land Systems Division (Slavin) completed a more radically configured version of the M-113, dubbed “Urban-Fighter”, optimized for Missions Others Than War and Low Intensity Conflict (LIC), particularly in urban environment. The Urban-Fighter is considered to augment and replace IDF unprotected or less protected vehicles currently operating in counter-insurgency operations in the West Bank. By the end of June 2007 IMI delivered the Urban-Fighter’s prototype to the IDF for testing. IMI expects the IDF to decide on potential procurements after the tests completion.

Unlike other M-113’s up-armoring projects, the ‘”Urban-Fighter”’ required only minor automotive upgrade, which further contributes to its cost effectiveness. Although this vehicle received a massive improvement in its armor protection, the conversion of a plain Gavin (M -113) into a fully equipped Urban Fighter using the Urban-Fighter kit is performed within days at a cost about 10 percent of the cost of a Mine Resistant Ambush Protected (MRAP) currently produced for the US Army and Marines. The vehicle’s protection was enhanced to stop heavy machine guns, shrapnel and most types of Improvised Explosive Devices (IED) utilizing the Iron Wall technology armor suite developed by IMI, providing bulletproof armor as well as IED , including Explosively Formed Projectiles (EFP) and Explosively Formed Fragments (EFF) protection. In addition, the Urban-Fighter uses improved slat armor, protecting it from attacks by RPGs.

The new vehicle offers features hitherto unavailable to APCs, including armored transparent side windows, offering unobstructed visibility upwards and sideways. 360 degrees observation and firing capability is provided for the commander and another crewmember by a raised cupola fitted with transparent armor. Firing ports are imparted for warfighters in the front, sides and rear. The fighting compartment was has also been redesigned with the addition of blast-protected seats, improving the survivability of the crew to attacks by mines and IEDs. The vehicle can carry eight fully loaded troops and a driver. Before beginning the field trials the vehicle is expected to receive a remotely operated weapon station which will further add to its visibility and firepower.

The driver’s position was greatly improved, compared to conventional M-113s and is now fitted with two windows and side and rear looking video cameras eliminating the ‘blind areas’ that necessitated direction by the commander. The new driver’s compartment ensures good visibility under most driving conditions, for safe driving on roads, dust roads and cross country. The current configuration retains the ‘steering sticks’ however the vehicle can be installed with an optional steering wheel to further simplify driving.