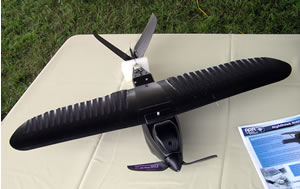 Nighthawk, formerly known as BatCam or Tacmav, is a miniature, foldable unmanned aerial system, is a third generation micro-UAV developed at Applied Research Associates (ARA). 84 systems have already been delivered, with more than 260 aircraft, primarily from the earlier models. Systems were delivered to Air Force Special Operations units and, through the Rapid Equipping Force (REF) to US forces in Afghanistan.

These small UAVs were tested in combat by the units from 82nd Airborne division, demonstrating good results. The current version is implementing the feedback from the troops and lessons learned during these operations. ARA’s latest version of the micro UAV is the Nighthawk. Utilizing the same folding wing method used in previous models,

NightHawk is ready to fly as soon as it is pulled from its container. The range of the current version is increased to 10-15 km, and flight duration extended to 70- 90 minutes cruising at speed of 18 – 35 knots. The air vehicle, constructed from tough, lightweight carbon fiber airframe and flexible wings, which can be folded around its fuselage, allowing the entire UAV to be stored in a small tube. When pulled out of the tube, the folded wings automatically snap into place. It weighs only 1.6 lbs and has a wing span of 26 inches. It is designed to operate at an altitude of 200 – 500 ft above ground level, at elevations up to 11,000 ft above sea level. NightHawk can be launched by hand toss, from standing, sitting, prone position or from moving vehicles. To ease tracking, NightHawk is equipped with a remotely controlled visible/IR strobe.

Nighthawk is can be carried as an ‘assault pack’, weighing only 15 lbs. It is equipped with a modular payload comprising a forward looking daylight camera, low-light camera or side looking thermal sensor. Each system comprises two aerial vehicles contained in storage tubes, carried on the sides of a standard ALICE backpack. The ground control unit utilizes a Panasonic Toughbook laptop loaded with the GCU software and communications kit.

The first generation of the system, known as TacMav, was developed to meet the requirements of special operations command. TACMAV system includes three aerial vehicles, modular payloads, and ground control unit and communications equipment. The MAV has a cruising speed of 80 kph. The first generation was a 50 cm long miniature drone with a wing span of 53 cm. First generation TACMAV used a payload pod containing two color CCD cameras and a video transmitter, weighing only 40 gram. The total payload capacity of the TACMAV is 80 gram. The user could select forward or side looking camera. 15 frame “snapshots” can be used to recorded target of interest. The battery operated vehicle has an endurance of 30-50 minutes, using rechargeable lithium polymer cells. Higher capacity cells were also considered, extending the mission twofold. The GCU is running standard Air Force Portable Flight Planning System (PFPS) interface for mission planning, supporting pre-flight planning, in-flight updates and manual control.

In November 2007 Irvine Sensors and Applied Research announced plans to upgrade the Nighthawk’s payload packageusing Irvine’s proprietary thermal and visible cameras. The two companies also plan to modify the Nighthawk to enable tube launching, facilitating operations from vehicular platforms. The command and video datalinks are also to be improved introducing secure wireless transmission. The two companies are cooperating to pursue business opportunities with US MC and Army, as well as other applications and services. Under the teaming arrangement, Irvine Sensors will act as prime contractor for contracts involving Nighthawk-based applications for use on U.S. Army and U.S. Marine Corps mounted combat vehicles, with Applied Research serving as subcontractor. For other applications, the roles will be reversed.