TM/MC, developed and produced by the Canadian company Mist Mobility Integrated Systems Technology, Inc. (MMIST) represents a Commercial Off The Shelf (COTS) ‘freefall rig’ designed for super-sized cargo, rather than a human sky diver. The system uses a rectangular, 900-square-foot parachute, which can be steered, like a classic round chute. It also incorporates a small drogue parachute to help stabilize the cargo pallet, keeping it facing upward so the main chute opens properly after freefalling. Sherpa can accommodate rigged weights from 50 to 2,200 pounds (one ton) deployed from an altitude 25,000 ft and offset distance of up to nine miles from the target. Several Sherpas could be dropped during one pass, saving time and fuel, and each could soar to a different unit at a different location stretched over several miles.

While in flight, Sherpa constantly checks its position using a GPS receiver, and makes flight adjustments as necessary, pulling on two steering lines to position the parachute on the correct flight path. Before takeoff the system is programmed with the altitude and speed, the cargo’s weight, drop zone location and wind speeds predicted for the various heights. The system will calculate its flight plan autonomously. 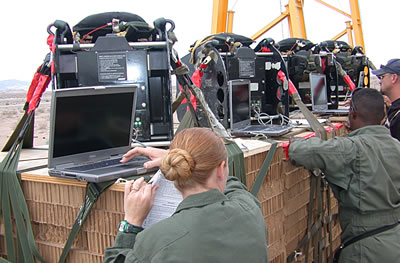 Sherpa can also be programmed to maneuver around known obstacles or enemy locations. The system can operate autonomously or guided by a human operator, from an aircraft, by a parachutist or from the ground. The handheld remote controller provides manual over-ride and adjust the landing point in-flight. The system is compatible with current airdrop platforms such as C-130, C-141, C-17, C-123, C-23, C-160 and is also capable of drops from rotary wing aircraft (i.e. CH-47, CH-53). At a cost of about US$60,000 per unit, Sherpa can be recovered without special tools and be reused within a 45 to 90 minute time frame.

Sherpa is currently operational in Iraq as part of Combat Services Support Delivery, of supplies to soldiers throughout the vast portion of Iraq. It is operated by the U.S. Military, Canadian forces and a number of NATO forces. The Sherpa versions deployed since 2003 with the US Marine Corps in Iraq can carry only 1,200 lbs (545 kg) of cargo. By 2008, the corps expects to get larger versions, capable of supporting 2,200 (1 ton) and 10,000 lbs. (4.5 ton). The US Special Forces Command operates the CQ-10A “Snow Goose” powered paragliders, also developed by MMIST. 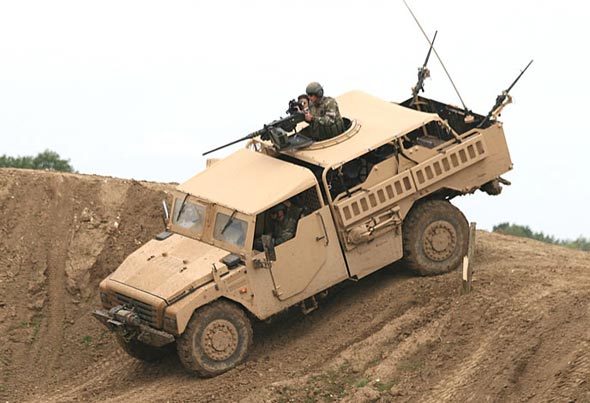 Sherpa Light – a New Line of Tactical vehicles from France

New All Terrain Vehicles on Display at Eurosatory 2010