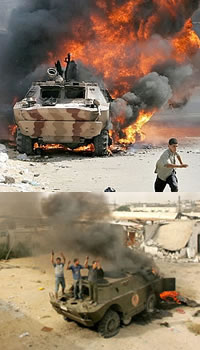 Prime Minister Ehud Olmert said in Sharm e-Sheikh last Tuesday that one cannot talk about possible failure at Annapolis because its existence is itself an achievement. Indeed, the Arab foreign ministers meeting in Cairo Friday which agreed to send ministers to Annapolis on behalf of the League’s Follow-Up Committee, is in itself an unprecedented gesture. But expectations should be kept within realistic bounds: Saudi foreign minister Saud al Faisal said: “We are not going for handshakes or a display of emotions… We are there only to reach a peace which safeguards Arab interests and safeguards the Palestinian, Syrian and Lebanese lands. Put in clear: at best it would signal a more-of-the-same attitude towards Israel-or better phrased- let us see what Olmert is willing, or able to deliver. The sober fact is that neither Olmert nor Abu Mazen can deliver ANYTHING – based on their own political dilemma, which exists on either side. Moreover, all three (including President Bush) are already widely regarded as “wingless lame ducks” in their own entourage.

Based on such unfortunate facts, obviously, the fatuous Annapolis “peace process” will fall apart, as it did before in similar, alas, countless events, since it was never bound to achieve anything anyway. This is what usually happens when delusional ideas confront reality.

But, delusional thinking is very tenacious – politicians with no valid ideas are loath to abandon even some of the most ridiculous policies, since, having invested so much political capital in its futile effort- they are adamant that something must come out of this. Unfortunately, Annapolis is already on the path to follow this same fiasco again.

But there may be more to Annapolis, than meets the eye: President George W. Bush needs more from the long-awaited and oft-discussed event than just launching rather hopeless negotiations. He needs this conference to show the Arab world that progress is actually being made on the Israeli-Palestinian track, so that the Arab countries at the summit will coalesce and deal with other, much more pressing problems in the region: Iran, for instance, and the spread of Shi’ite extremism and Ahmadinejad’s ambitious Shi’ite Crescent to conquer the Sunni Arab Middle East. Bush’s game plan is that signaling real progress will, at last, cement together a coalition of “moderate” Muslim states and harness them behind US backing sanctions against Iran. The Israel-Palestinian issue is just a marginal bi-product, so it seems.

Israeli analysts believe that this trend could solidify, if the Arab delegation will include senior participants. It may well be the start in creating an impressive Sunni Arab opposition axis led by the US and Western alliance against Shi’ite Iran. If Syria should be included, this could be the first significant set-back for Ahmadinejad’s Shi’ite crescent. But this would inevitably force him to act in order to derail this process before it is too late.

In fact, the entire Annapolis meeting could have been a rather clever move by President Bush and Condoleezza Rice ( a last minute effort to save the administration dilemma in Iraq’s future) to initiate a political comeback into Mid Eastern affairs, after the Iraq fiasco and the bungling democratization process in Egypt and Palestine. If indeed this is the case, then Olmert and Abu Mazen, would have been only pawns in this ruthless game political chess- the outcome of which is not clear- as we wait for Tehran for its next challenge in Lebanon and Palestine in order to derail this entire process. Indeed, Mahmoud Ahmadinejad being a very shrewd operator, his reaction could no doubt prove surprising and very deadly

Over the last two months various Palestinian spokesmen have warned that failure at Annapolis would lead to yet another round of violence, perhaps a third intifada. Israeli officials, including Chief of General Staff Lt.-Gen. Gadi Ashkenazi, however, are skeptical, saying that the Palestinians have been badly weakened by the last seven years, are suffering from deep division and could not wage another terrorist war right now, even if they wanted to. But the Palestinians are not the only players in this game. In fact, as matters stand- Iran and Syria are the established sponsors of Palestinian violence and will no doubt remain at the hub of such future events.

Iran has two established aces in its hand to play this game: Hamas and Hezbollah. Both of these may becoming more and more isolated, but remain still highly dangerous operators. Hezbollah is holding a trump card in the Lebanese elections- which have already entered into a dangerous cliffhanger situation on Friday Midnight. Barring a miracle, which seldom happens in this unpredictable region, Lebanon could well be on its way into a catastrophic abyss. A civil war in Lebanon, could derail not only any US-backed Sunni effort, but actually chase out the European 1701 UNIFIL contingent, as it did in 1983. Moreover, with the Lebanese national army disintegrating into rival factions again, Hezbollah would regain the Israel border region to restart conflagration, on Tehran’s time and will.

To Israel’s south – Hamas is already on its way to create a substantial military force, ready and highly motivated to confront any IDF incursion into the well prepared Gaza Strip defense. Based on experiences gained from last year’s Lebanon war, with able assistance from Iranian and Hezbollah experts, Hamas will offer a bloody fight to the Israeli army. Moreover, whatever the outcome of the Annapolis meeting, analysts are convinced that Abu Mazen’s inability to implement any concessions to the Israelis, will recreate the deadlock further aggravating discontent in the West Bank, which will only bolster Hamas’ influence and power base there. The inevitable result would be that Hamas will eventually exploit PLO weakness and take over the West Bank in the same manner in which it defeated 60,000 Fatah activists and security forces in last June’s shocking Gaza fiasco.

Sofar, what prevented this from happening is the presence of the IDF in most of the Palestinian townships, which otherwise would long have joined Hamas. Israeli defense analysts have already warned of allowing any concessions that PM Olmert has in mind, for example, handing over security to Abu Mazen’s security forces in dangerous West Bank focal towns. First such concessions, allowing Fatah police into Nablus have already demonstrated their inability to restore even public order against the local warlord domination. Olmert’s latest “gift” of 50 Russian BRDM-2 armored cars with 14,5mm turret mounted heavy machine guns, is another of those futile gestures, which could endanger low flying helicopters supporting counter-terror operations in the West bank Hamas hideouts. In Gaza, Hamas took charge of similar cars, provided with US assistance, but within hours, with nearly a shot fired by Fatah security forces- ten times Hamas strength these became coveted weapons for Hamas. A similar situation could happen in the West Bank- as all these weapons fall into Hamas hands- and then what?

Here then are the seeds in what could become Ahmadinejad’s move to derail the Sunni Arab anti-Shi’ite axis before it matures into shape: Create total chaos in Lebanon, enhancing the Qassam offensive against southern Israel, with longer range rockets- against which the IDF still has no technological answer- with aim to draw Israel into an unwanted and costly ground attack. Challenge Abu Mazen’s frail government- through elections or physical take-over of its territory- at the same time confronting the IDF with new suicide attacks- actually a second front. If Qassam rockets will be fired from vantage positions in close-border villages at lucrative strategic installations and heavily populated urban targets, all coming within range in the heart of Israel, this would become a strategic challenge to the IDF. Furthermore, with Hezbollah again deployed along its northern border, Israel would have to mobilize all its military power to fight off a three-frontal war on its rear. By delivering such a clear message, that a full scale Middle East conflict is in the offing, with unpredictable consequences, would be Mahmoud Ahmadinejad’s challenge to Washington’s latest gambit. It is common knowledge that this turbulent region is already filled to the brim with some of the world’s most highly sophisticated and lethal weapons which East and West has created. Is this scenario, actually what President George W Bush warned off, hinting on World War Three?

Syria accepted today the US invitation to the peace conference in Annapolis; Heading the Syrian deligation will be the deputy Foreign Minister Fayssal al-Mekdad. According to the Reuters news agency, the Syrian statement did not give Syria’s reasons for attending or say why it will not be sending its foreign ministers like the other Arab participants. At a meeting of Arab foreign ministers in Cairo, Friday (Nov. 23, 2007) , participating Arab countries agreed to attend the peace conference in Annapolis, Maryland. The recent Syrian move could signal Bashar Asad hesitatingly making a first move oward a Sunni axis against Iran’s Shi’ite regional ambitions. Although too early to singnify a definite change of direction towards the US initiative, Damascus could have second thoughts, as to its adherence to the Tehran Shi’ia dictate. It remains to be seen, how Mahmoud Ahmadinejad will react to Damascus’ latest move, which is certainly challenging his strategy towards Syria. Perhaps the tense situation in Beirut, Syria and Iran’s strategic interest sphere, will be next on the top agenda.

New developments there are due by the end of this week.